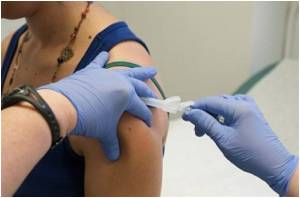 Researchers from Nationwide Children's Hospital have developed a needle-free vaccine for ear infections. The vaccine - which targets the bacteria responsible for nearly one half of all ear infections - won't be delivered by a needle jab, but absorbed through the skin via a small, dime-sized patch.

"For a child, a non-needle vaccine has obvious benefits, but our research also shows that delivering the therapy through the skin sets off beneficial immune responses we might not see otherwise," said Laura Novotny, Chief Research Associate at The Research Institute at Nationwide Children's.

The team's latest animal study data showed that when the experimental vaccine is applied to the outer ear, it appears to pack a one-two punch against nontypeable Haemophilus influenzae (NTHI), attacking key parts of the bacteria's defenses and kick-starting the body's own immune system to help clear out the infection.


This dual mechanism helps explain earlier animal research conducted by the team that showed the vaccine could be used as a either a preventative or a treatment for ear infections, which are commonly treated with antibiotics. However, NTHI bacteria build biofilms, sticky protective covers that evade antibiotics and allow the bacteria to flourish in the middle ear, nasal passages and lungs to cause repeat infections.
Advertisement
"There are kids that have seven or eight ear infections before their first birthday, and these chronic infections can cause language and developmental delays. To have an option that could help break the reinfection cycle and reduce antibiotic use is significant," said Novotny who is also the study's co-author.

The experimental therapeutic appears to target key proteins used by the bacteria to build biofilms and cling to the cells lining the middle ear. The investigators observed the vaccine helped the body mount a local defense that zeroed in on those proteins, and also rallied systemic molecular defense mechanisms that helped further eliminate the infection.

"We think it's the first time anyone has shown that a topical application of an agent can trigger both a local and systemic immune response against ear infections caused by NTHI," said Novotny, who received a grant in 2012 to help refine the development of an adhesive patch from the Center for Clinical and Translational Science (CCTS), an NIH-supported research partnership between The Ohio State University and Nationwide Children's.

The vaccine research team, led by Lauren Bakaletz, PhD, Director of the Center for Microbial Pathogenesis at The Research Institute at Nationwide Children's, has been collaborating with John Clements, PhD of Tulane University for several years to identify and exploit weaknesses in the NTHI bacterial cell structure to create a vaccine.

Middle ear infections are very common in children under the age of four, and each year, an estimated one billion cases of acute and chronic infections occur worldwide. While ear infections aren't typically deadly in developed countries, they cause quality of life and economic problems that have lifelong impacts including language and developmental delays. The researchers are hopeful that the simplicity of the patch could make it an ideal candidate for a global vaccination program.

"The patch could be truly impactful in developing countries, where costs for widespread vaccinations can be an issue. Syringes and trained medical professionals who can administer a vaccine can be expensive - but the patch could reduce material and resource costs significantly," said Novotny.

Ultimately, researchers envision creating a vaccine patch similar to the kind placed behind the ear to prevent motion sickness. As a vaccine for children, the patches would be stuck behind both ears or on the back of the neck, and possibly worn for just one day.

Novotny said that so far, there have been no side effects seen in animal subjects that have worn the patch.

The team hopes to begin testing the skin patch in humans in the not too distant future, and to use the insights on NTHI bacteria they've observed to help inform other research on biofilms and infectious disease.

The study has been published in Vaccine.

Ear Pain - Symptom Evaluation
Ear pain is either due to a condition that affects the ear, or is referred from the surrounding ......

Biodegradable Pellet Targets Glue Ear Infection
A revolutionary biodegradable pellet has been developed by The University of Nottingham scientists ....