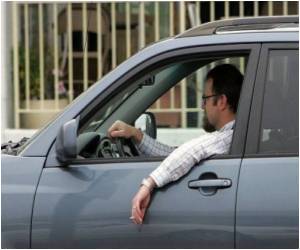 A recent research highlights the need for smoke-free cars to protect children from tobacco smoke exposure in cars. "An infant strapped into a car seat is involuntarily and intensely exposed to more than 400 toxic chemicals in tobacco smoke," said abstract co-author Jonathan P. Winickoff. "They have no voice and no choice in whether their parents smoke in the car."

Winickoff and his colleagues conducted the analyses to determine the prevalence of tobacco smoke exposure in cars among children and to examine factors associated with parents strictly enforcing a ban on smoking in their cars.

Parents were invited to participate in a survey after their children had been seen for a well or sick visit at one of seven pediatric practices in six states. Parents who smoked were asked if they had a car, whether they had smoking rules in their car, their child's age and if their pediatrician advised them to have a smoke-free car.

Every cigarette you smoke is causing irreversible damage to your body; slowly killing you from the inside. It also endangers those around you, your family and children.
Advertisement
Of the parents who reported smoking in their car, 52 percent said smoking occurred with children present. Only 14 percent of parents said they were advised by a pediatric health care provider to have a smoke-free car.

The study was recently presented at the Pediatric Academic Societies (PAS) annual meeting in Denver.

Approximately half the smokers die due to smoking -related diseases. But it is not just the smokers who are at the receiving end. The passive smokers too, often pay a heavy price. If you still have not 'kicked the butt', learn more horrifying facts about smoking by participating in the following quiz.
Advertisement
<< Study: Early Intervention May Prevent Smoking
Mother's Day Wish List >>

Smoking in Cars is Dangerous for Kids

Are Menopause Symptoms Troubling You?: Try these Options
View all
News Archive
News Resource
Advertisement
News Category
Why East African Newborns Are at Increased Risk of Birth Defects? Healthy Ways to Get Your Baby Sleep Longer Classmates Sitting Next to Each Other More Likely to Become Friends Developmental Dyslexia Plays Major Role in Human Adaptation Is Headache in Kids a Consequence of Online Classes?
More News
Sign up for Wellness Consult a Doctor Sign up for Selfcare