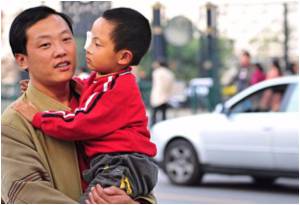 A top Chinese institute for rural studies said that households in rural China have seen incomes increase on average over the past three years. Despite this he wealth gap in the vast countryside has almost reached the warning level.

The cash income of rural households grew 14.13 percent from a year earlier to an average of 38,894.4 yuan (6,173.7 U.S. dollars) last year, and the per capita cash income in rural areas rose 11.95 percent to 9,260.6 yuan, according to a survey by Central China Normal University's Center for China Rural Studies.

Respect is the Key to Happiness, Not Bank Balance

According to a new research, a person's overall happiness is not based on his bank balance but on the degree of respect and admiration he commands in the society.
Advertisement

The institute said in a report released Tuesday that the income growth was fueled by rising wages among farmers who have abandoned rural life to work as migrant laborers outside of their hometowns, mostly in cities.


China is experiencing the largest mass migration of people from the countryside to urban regions in history. The nation had 253 million migrant workers by end of 2011, 10.55 million more than a year earlier, according to official data.

Literacy and Education May Prevent Dementia

Dementia is characterized by loss of global cognitive ability beyond normal aging in previously unimpaired individual. It affects activities like memory, speech understanding, etc.
Advertisement
The wealth gap among rural households is widening. The Gini coefficient, an index reflecting the rich-poor gap, in rural China stood at 0.3949 last year, nearing the warning level of 0.4 set by the United Nations, the institute said.

"We believe the wealth gap in the nation as a whole is well above 0.4, because the gap is large between urban and rural areas," Deng Dacai, professor and deputy chief of the institute, told Xinhua. "But as an institute for rural studies, we don't have urban figures."

The Gini index, which measures income distribution on a scale of zero to one, indicates a relatively reasonable income gap if the number is between 0.3 and 0.4. A Gini index between 0.4 and 0.5 signals a large income gap.

The last time the Chinese government published a Gini index for the nation was in 2000 when it stood at 0.412.