Neanderthals may Have Eaten Stomach Contents of Animals' 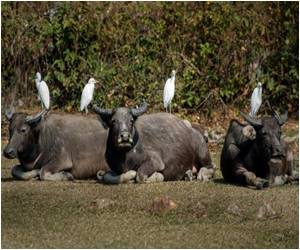 They have found that members of this extinct human species cooked vegetables and consumed bitter-tasting medicinal plants such as chamomile and yarrow.

According to the researchers, led by Karen Hardy at the Catalan Institution for Research and Advanced Studies in Barcelona, these were not brainless carnivores, in other words. These were smart and sensitive people capable of providing themselves with balanced diets and of treating themselves with health-restoring herbs, the Guardian reported.


But now this tale of ancient tartar has taken a new twist with two researchers Laura Buck and Chris Stringer at London's Natural History Museum challenging the Barcelona group's conclusions.
Advertisement
Dental research does not prove that Neanderthals were self-medicating, vegetable-eating sophisticates, one told the Observer.

There are other, equally valid but decidedly more grizzly explanations to account for those microscopic fragments of herbs and plants found in Neanderthal teeth.

Stringer argues that the tiny pieces of plant found in Neanderthal teeth could have come from a very different source. They may well have become embedded in the stomach contents of deer, bison and other herbivores that had then been hunted and eaten by Neanderthals.

Stringer said that many hunter-gatherers, including the Inuit, Cree and Blackfeet, eat the stomach contents of animals such as deer because they are good source of vitamin C and trace elements.

For example, among the Inuit, the stomach contents of an animal are considered a special delicacy with a consistency and a flavour that is not unlike cream cheese, he said.

The crucial point about the stomach contents of grazing animals is that they are filled with fragments of the plants that those herbivores had consumed shortly before they were stalked and killed.

When those contents are then chewed and eaten, the tiny pieces of grass and herbs are transferred to their hunter's teeth and get embedded there.

Then, when their devourers are themselves killed, or die of natural causes, shortly afterwards, those plant fragments are preserved in their teeth for later analysis by modern palaeontologists.

However, Stringer and Buck stress that they are not arguing that Neanderthals definitely did not eat vegetables or could not have used certain herbs as medicines.

The research is published in the journal Quaternary Science Reviews.

Toothpicks Were Used by Neanderthals to Alleviate Pain of Gum Disease
Hominids used toothpicks to mitigate pain caused by oral diseases such as inflammation of the gums, ...

Human Race Improved Its Immune System After Breeding With Neanderthals
A study has suggested that had it not been for the Neanderthals the human race would not have ......

Study Says People Living at High Latitudes Have Big Brains, Eyeballs
People who reside in high latitude regions have bigger eyeballs and brains than other individuals, ....

Advancement in DNA Research may Bring Back Woolly Mammoth
Freddie Flintstone and his friends in Bedrock won't be the only persons to see a woolly mammoth ......