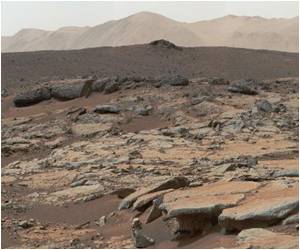 NASA's solar observation mission, Solar Terrestrial Relations Observatory (STEREO), has managed to map the vast atmosphere of solar particles that surround the sun which plays host to magnetic fields, solar flares and the rise and fall of gigantic columns of materials.

Now, using NASA's Solar Terrestrial Relations Observatory, scientists have found that this atmosphere, called the corona, is even larger than thought, extending out some 5 million miles above the sun's surface-the equivalent of 12 solar radii.

Craig DeForest of the Southwest Research Institute in Boulder, Colorado, said, "We've tracked sound-like waves through the outer corona and used these to map the atmosphere," said. "We can't hear the sounds directly through the vacuum of space, but with careful analysis we can see them rippling through the corona."


The researchers studied waves known as magnetosonic waves, and they are a hybrid of sound waves and magnetic waves called Alfven waves. Unlike sound waves on Earth, which oscillate several hundred times per second, these waves oscillate about once every four hours-and are about 10 times the length of Earth.
Advertisement
Tracking magnetosonic waves showed DeForest and his team that the material throughout this extended space remained connected to the solar material much further in. That is to say that even out to 5 million miles from the sun, giant solar storms or coronal mass ejections can create ripple effects felt through the corona. Beyond that boundary, however, solar material streams away in a steady flow called the solar wind-out there, the material has separated from the star and its movement can't affect the corona.

Realizing that the corona extends much further than previously thought has important consequences for NASA's Solar Probe Plus because the mission will travel to within 4 million miles of the sun. Scientists knew the mission would be gathering information closer to the sun than ever before, but couldn't be sure it would travel through the corona proper.

The results have been published in The Astrophysical Journal.

Source: ANI
Advertisement
<< Increasing Number of Skilled Birth Attendants can Save Live...
Study Finds Reproduction Later in Life is a Marker for Long... >>

Women Comprise More Than Half Of NASA's New Astronaut Class
An announcement was made by NASA that it has selected its first new contingent of potential ......