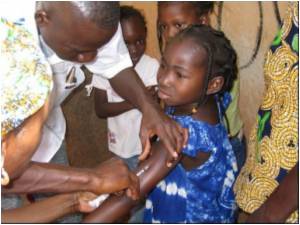 A new protective measure against meningitis and pneumonia in the form of a nasal spray vaccine is being developed by scientists.

The research team, being led by Dr Qibo Zhang, from the University of Liverpool, believes kids could benefit from the spray, which is based on tackling the bacteria pneumococcus.

There are more than 90 known pneumococcal types, which can cause deadly illnesses including pneumonia, blood poisoning and meningitis.


The bacteria also causes middle ear infection and sinusitis and every year across the world up to one million under-fives die because of pneumococcus.

Pneumonia is a lung infection that can be caused by a bacteria or a virus. It causes inflammation of the alveoli or the air sacs of the lungs.
Advertisement
The novel vaccine will contain a substance called D4Ply, a fragment of a protein produced by nearly all the different types of pneumococcus.

If experiments prove successful, the vaccine could therefore protect against most strains.

Experiments will focus on cells taken from the adenoids of around 30 youngsters under five to see if the vaccine is effective as a nasal spray.

Researchers believe that the vaccine could be much cheaper to produce than those already available in the market.

"Current vaccines are complex and expensive to produce, they do not protect against all of the 90 or so different types of this bacterium and they are not all effective in very young children. Better vaccines are needed," the Scotsman quoted Zhang as saying.

A person's susceptibility to bacterial infection, particularly in the lungs or respiratory tract, is increased by diseases that affect the mitochondria.
Advertisement
Advertisement