A new study has revealed that nasal spray is safe and effective at quickly treating cluster headaches, the most painful form of headaches.

The double-blind trial had 52 participants with cluster headache who used five or 10 milligrams of zolmitriptan nasal spray or placebo as a therapy for 151 separate cluster headache attacks.


"This is a significant finding and the main endpoint of our study. The 10 milligram dose worked as quickly as 10 minutes in some patients," said study author Alan M. Rapoport, MD, with The New England Center for Headache in Stamford, CT, and Clinical Professor of Neurology at The David Geffen School of Medicine at UCLA in Los Angeles. Rapoport is a Fellow of the American Academy of Neurology.

"Cluster headache is an extremely severe headache disorder with enormous unmet treatment needs. Few medications for cluster headache have been systematically tested, and only one, which involves an injection of sumatriptan, has been FDA approved,' said Rapoport.

Cluster headache is a relatively rare form of headache. Men are three to four times more likely to suffer from cluster headaches than women. The pain is considered to be the most severe of the primary headache disorders and often peaks within five minutes and remains severe for about one and up to three hours.

The pain is usually associated with neurological findings such as a droopy eyelid, small pupil, red and tearing eye, and stuffed and running nostril. All of the symptoms usually occur on the same side as the headache pain.

"Because a cluster headache attack builds up to a crescendo within five to 15 minutes, treatment must be rapid and offer significant relief," said Rapoport.

"While the FDA has not approved zolmitriptan nasal spray for use in cluster headaches, it may someday be considered a first-line therapy." Side effects were mild and no serious adverse events were reported during the study," Rapoport added.

The study is published in the August 28, 2007, issue of Neurology, the medical journal of the American Academy of Neurology.

Evaluation of Headache - Introduction
Many controversies exist regarding the nomenclature and classification of headache. International Headache Society (IHS) developed and published a classification and diagnostic criteria in 1988.
READ MORE

Shed Off Your Shyness With a Nasal Spray!
University of Zurich researchers have created a spray that can relieve people of shyness, and help them socialise with others.
READ MORE 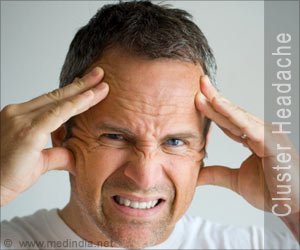 Cluster Headache
Cluster headache is a periodic, intense, sharp, burning and explosive pain that begins suddenly on one side of the head and tends to get worse quickly, reaching its peak within 10 minutes.
READ MORE