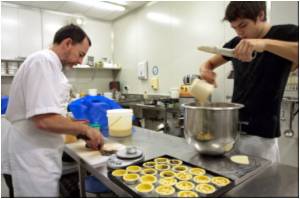 All of us have experienced airline food. They are basically a string of stale, soggy sandwiches and some sweaty meat and veg.

But head chef of the Virgin Australia airline has revealed that airline food is getting better and all the myths surrounding it are false.

As a traveler, one is always worried about being served with stale, soggy sandwiches, but celebrity chef Luke Mangan said that plane food has gained an unfair reputation, News.co.au reported.


Mangan has opened a test kitchen inside his Sydney headquarters where recipes are tested before they enter the skies, to make sure the fliers get a quality meal while flying.
Advertisement
The chef said that food that is served on the plane is not frozen or prepacked but is made that morning and sent into the skies, and only some items are frozen to preserve the freshness.

He said that the belief that "airline food is designed in such a way that it will block the person up" is an urban myth and only certain foods, such as stodgy meals, could feel heavy in the stomach.

However, Manga asserted that he makes sure that the meals he serves are light, fresh, yet filling.

The chef also debunked the myth that extra spice is added to make food more flavoursome, by saying that though different flavours do work better midair than others, food should be kept as simple, fresh and light as possible.

He added that it is about using strong flavours when cooking such as tandoori, spices and fresh herbs.

Source: ANI
Advertisement
<< Yorkshire Brewery: The Best Beer in the World
Corkscrew: The Gadget Britons Treasure the Most >>

Professor Tries To Explain Why Airline Food Tastes Awful
An explanation for why airline food is often awful was attempted by a professor of physics....

Food Poisoning in a Residential School in Tapi
Due to suspected food poisoning 20 students of Jawahar Navoday Vidyalaya at Borkhadi village in ......

Extremes of Adopting a 'Clean Food' Diet Causes Harm
It was three years ago that Rachael Devcich, 42-year-old Art Director and mother of two kids, got .....

Junk Food Eating Habit in Kids Promoted By Online Video Games
Some online video games not only promote a less-than-active lifestyle for children, but the content ...