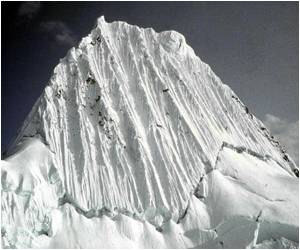 To understand how microbes survive in cold conditions, researchers have studied microbes in ancient permafrost.

To understand how microbes survive in frozen conditions, Brent Christner, associate professor of biological sciences, and his colleagues focused on analysis of DNA, the hereditary molecule that encodes the genetic instructions used in the development and function of all organisms.

Christner said that microbes are made up of macromolecules that, even if frozen, are subject to decay. The worst kind of damage is known as a double-stranded break, where the microbe's DNA is cleaved into two separate pieces that need to be put back together to make the chromosome functional.


The survival of microorganisms in ancient glacial ice and permafrost has typically been ascribed to their ability to persist in a dormant, metabolically inert state. But even this explanation does not account for the background levels of ionizing radiation that cause damage to these microbes' DNA, frozen at the bottom of a glacier or not.
Advertisement
"In order to survive that long, different studies for instance point towards dormancy, or 'slow motion metabolism,' but regardless of the physiological state, without active DNA repair an organism will accumulate DNA damage to an extent that will lead to cell death," Markus Dieser said.

Results from Christner and colleagues' recent paper point to another explanation: mechanisms that repair DNA can operate even under freezing conditions. In laboratory experiments, Christner and colleagues took frozen suspensions of bacteria native to Siberian permafrost and exposed them to a dose of DNA-damaging ionizing radiation equivalent to what the microbes would have experienced during 225,000 years buried in permafrost.

The researchers then let the microbes incubate at low temperature for a period of two years, periodically checking the integrity of the microbes' DNA.

As expected, ionizing radiation damaged the circular microbial chromosome, transforming it into a slurry of smaller pieces.

What surprised the researchers was that, over the course of two years in the freezer, the pieces of DNA began to come back together in their proper order.

The study is published in the journal of Applied and Environmental Microbiology.

Environmental Conditions Structure Your Body's Personal Mix of Microbes
A much stronger influence is being created by environmental conditions on the mix of microbes ......

For Immunity Gut Microbes Play Key Role
Gut microbes may hold the key to deal with significant health problems faced by people in the world ...

Microbes Impact the Evolution of Their Host
The thousands of seemingly invisible microbes that you carry around with you may be even more than ....