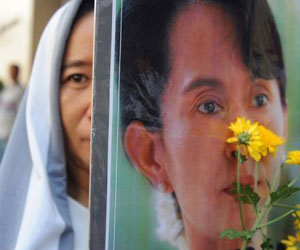 The military regime has kept the Nobel laureate in detention for almost 15 years and she has been barred from running in upcoming elections that critics have denounced as a sham aimed at entrenching the generals' power.

While activists held protests around the globe, world leaders called for the ruling military junta to free her.

Suu Kyi's party won the last polls in 1990 but was never allowed to take office. A UN working group this week pronounced her detention a breach of international human rights law, prompting new calls for her release.

Despite the colossal devastation the country has experienced in the wake of the Nargis cyclone, Myanmar's ruling military junta is still fighting shy of foreign aid.
Advertisement
"I once again call on the Burmese government to release Aung San Suu Kyi and all political prisoners immediately and unconditionally and to allow them to build a more stable, prosperous Burma that respects the rights of all its citizens," he said, using the country's former name.

The woman known in Myanmar simply as "The Lady" remains the most powerful symbol of freedom in a country where the army rules with an iron fist.

The opposition leader spent the day at her lakeside mansion in Yangon, where she lives with two female assistants, cut off from the outside world without telephone or Internet access.

About 400 of her supporters held a party at one of their houses in northern Yangon in her absence. Plain-clothes police outside photographed and filmed people attending the event.

"We, the NLD members, Daw Suu's friends and colleagues, pray for her release soon," said Win Tin, a former political prisoner and senior National League for Democracy (NLD) figure. "Daw" is a term of respect in Myanmar.

Suu Kyi's supporters, some of whom wore T-shirts bearing her image, freed caged birds, prayed in front of her portrait and cut a birthday cake.

NLD members are planting about 20,000 trees around Myanmar to mark her birthday and sent spicy food to her home to share with workers doing renovations.

Events to mark her birthday were being held in cities around the world, ranging from candlelight vigils to music concerts and solidarity rallies.

British Prime Minister David Cameron described the Nobel laureate as "a powerful symbol of the strength of the human spirit."

"The injustice of your continuing detention mirrors the injustice that the regime has inflicted on your country and your people for so many years. "Throughout that time, you have stood firm, at enormous personal cost, for the principles of liberty and justice," he said in an open letter to Suu Kyi.

UN Secretary General Ban Ki-moon said Suu Kyi "should be released without conditions as soon as possible" so she could participate in upcoming elections.

"This election must be held in a credible, impartial and objective way," Ban said on the eve of Suu Kyi's birthday.

In Prague, human rights activists wrote messages for the democracy icon on a graffiti wall decorated with her portrait.

In Kuala Lumpur, about 100 exiles sang patriotic songs and cut a cake.

"We urge the Myanmar people to boycott the election. The people will be cheated again. How can there be fair election with Aung San Suu Kyi and other leaders in jail," said Kyaw Myo Maung, 27, the event organiser.

Nearly 200 demonstrators, mostly Myanmar nationals, also rallied in Tokyo urging Japan -- which has long maintained trade and dialogue with Myanmar -- to step up pressure on the junta to free her immediately.

Supporters have also posted messages of support on Facebook and other social networking websites.

Suu Kyi's NLD was forcibly disbanded by the junta after refusing to meet a May 6 deadline to re-register -- a move that would have forced it to expel its leader and other members in detention.

Suu Kyi had her incarceration lengthened by 18 months in August last year after being convicted over a bizarre incident in which a US man swam to her home, and there are fears her detention may be extended again.

Her dedication to non-violence in pressing for change earned her a Nobel Peace Prize in 1991 and placed her -- along with Nelson Mandela -- among the world's foremost voices against tyranny.

Cherry and Kay Kay walk into room Number Two of a Yangon karaoke bar, where a man waits alone for them on a brown leather sofa.
Advertisement
<< Bacteria in the Gut - Contribute to Arthritis?
Resistance to Anti-malarial Medication Increasing - US Exper... >>