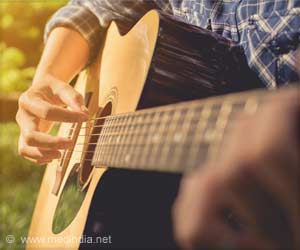 Careful analyses of the electrical signals of brain activity may reveal important harmonic relationships in the electrical activity of brain circuits, researchers have suggested.
Advertisement
‘There are stronger structural and functional connections in the vrains if musicians compared to those of non-musicians.’
Read More..


Research suggests that the brains of musicians have stronger structural and functional connections compared to those of non-musicians, irrespective of innate pitch ability.

The brain gets shaped in dramatic ways with years of musical training. Absolute pitch is the ability to identify a tone without a reference, and only a minority of musicians possess this. However, it is still unclear how this ability impacts the brain.

Leipold et al. compared the brains of professional musicians to non-musicians. Some possessed absolute pitch, while some didn't.

Findings showed that, surprisingly, absolute pitch might shape the brain in more subtle ways as there were no great differences between the brains of musicians with absolute pitch ability and without.

Results also showed that musicians that began their training at a younger age had stronger structural connections than musicians with a later start.

These results demonstrate how musical skills are showcased in our brain and how experience shapes the brain, especially early in life.

It is a myth that the brain quits generating new cells once you reach adulthood. They are regenerating all the time.
Advertisement
<< Atrial Fibrillation Linked to Modest Liquor Consumption
Positive Effect of Trees on Mental Health >>