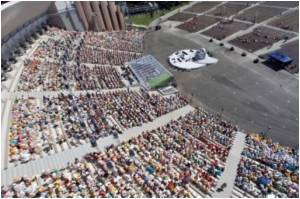 A music concert was conducted in Pune on Saturday to spread the message to the public about the Commonwealth Games as 'green games'.

Organised in association with the United Nations Development Programme (UNDP), the Global Environment Facility (GEF) and the Ministry of Environment and Forests (MoEF), this music concert was held as part of the 'Low Carbon Campaign'.


The highlight of the concert was performance by Euphoria, one of the top rock bands of India.


The players of the Indian hockey team also participated in the event.

"Our team doesn't use any transport facility for going from their hostel to the ground for practicing, they go walking to the ground as the slogan is 'Go Green'," said Joginder Singh, coach.

"The way we have designed our schedule, we request the residents of Pune to design their schedule in such a way that at least once in a week they should go to their office on bicycles," said Rajpal Singh, captain of the Indian Hockey team.

A series of such music concerts is being held all over India. In Pune, it was the second concert of the series. The first concert took place in Kolkata.

India is expecting about two million tourists in New Delhi for the Games, as well as about 10,000 athletes from 71 teams representing 54 Commonwealth member states, which will be held from October 3 to 14.

The 12-day sporting extravaganza will be India's biggest sporting event since the 1982 Asian Games in New Delhi.

Not Just Instruments, Musicians' Brains Too Synchronize During Gigs
When a group of musicians perform during a concert, their brains become synchronised in the same fashion as their instruments do, according to a new study.
READ MORE

Delhi's Commonwealth Games Wants to Check Its Carbon Footprint
The organizing committee of the Commonwealth Games 2010 and the United Nation Development Programme (UNDP) announced on Thursday the launch of the project 'Low Carbon Campaign for the Games.
READ MORE

Clean-Up Of Beggars For India's 2010 Commonwealth Games
India plans to round up beggars to shield foreigners from New Delhi's rampant poverty during the Commonwealth Games, seen as a showcase of the country's emerging economic might.
READ MORE