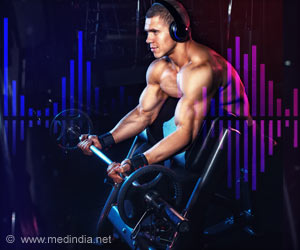 Sensors placed on the body can provide real-time measurements that help an individual monitor their own athletic performance or progress during rehabilitation. Known as biofeedback, this approach may be especially useful when access to a trainer or therapist is unfeasible, such as during in-home workouts.

For the new study, Lorenzoni and colleagues designed a music-based biofeedback system for helping weightlifters improve their technique while performing a weightlifting exercise known as the deadlift. A person using the system dons 22 body sensors that monitor deadlift technique. Then, they perform deadlifts while listening to music composed by the researchers. Bad technique lowers the sound quality of the music, while improved technique restores it.


To test this system, the scientists recruited 31 recreational weightlifters and divided them into two groups. One group performed deadlifts while receiving the music-based feedback, while the other group received feedback directly from instructors. For simplicity, feedback was provided for only two deadlift technique parameters.
Advertisement
The researchers found that both feedback types resulted in improved deadlift technique among the participants. Both resulted in similar levels of improvement, and participants reported similar levels of clarity and enjoyment for both. These findings suggest that music-based biofeedback could be a useful tool for weight training.

The authors note that future research could explore the long-term effectiveness of their new feedback system. They also suggest that the system could be improved by increasing its portability, and it could be applied to additional parameters of weight training technique.

Harmful Effects of Listening to Music Over Earphones / Headphones
Effects of over-exposure to loud music from earphones is gaining concern. Headphones used at unsafe ...