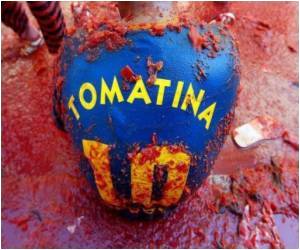 In the mushy annual celebration in the Spainish eastern town of Bunol, tens of thousands of revellers from around the world pelted each other with tonnes of tomatoes on Wednesday.

The one-hour bloodless battle, known as the Tomatina, left the town awash in a sea of tomato pulp.

Some 40,000 Spaniards gathered in this eastern town on Wednesday to hurl 115,000 kilogrammes (240,000 pounds) of tomatoes at each other in the annual Tomatina festival.
Advertisement

The town council brought in some 100 tonnes of ripe tomatoes on trucks for the estimated 40,000 tourists who descended on the town of just 9,000 inhabitants for the annual festival, which has taken place for more than 60 years.


Many of the participants were shirtless while others wore old clothes, hard hats or goggles.

Afterwards, workers hosed down the walls and streets to remove the tomato pulp.

Tens of thousands of people from around the world hurled tonnes of ripe tomatoes at each other Wednesday in an annual food fight that leaves the eastern Spanish town of Bunol covered in red pulp.
Advertisement
Spanish media said the tomatoes cost the town council around 28,000 euros (35,000 dollars), about one third of the overall budget of 70,000 euros for the festival, most of which goes to pay for security, cleaning services, mobile toilets and civil protection.

More than 100 police and 120 civil protection volunteers were on hand in case of incidents.

The "Tomatina" is held each year in Bunol, located in a fertile region some 40 kilometres (25 miles) north of the coastal city of Valencia, Spain's third-largest city, on the last Wednesday in August.

The origins of the event are unclear although it is thought to have its roots in a food fight between childhood friends in the mid-1940s in the city.

It has grown in size as international press coverage brought more and more people to the festival.

Spain's Economic Crisis is a Wet Blanket on Summer Festivals

Catalans are going to show they are not amused when the local parliament votes on whether to ban the practice of bullfighting, and if it does so, the practice would get its death blow in Spain.
Advertisement
News A-Z
A B C D E F G H I J K L M N O P Q R S T U V W X Y Z
What's New on Medindia