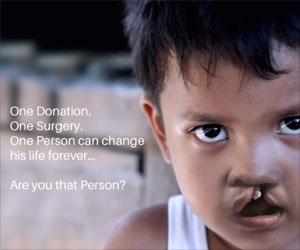 However, an increased number of surgeries between 8 and 10 years of age may predict increased anxiety and depression in adolescence, reports a study in the July issue of Plastic and Reconstructive Surgery®, the official medical journal of the American Society of Plastic Surgeons (ASPS).

ASPS member surgeon Justine C. Lee, MD, PhD, of UCLA is senior author of the new study. She comments, "In conjunction with our previous work that identified the 8-to-10 age range as a critical at-risk time period for poor psychosocial functioning, we now find that teenagers who had more surgeries during that age range report worse long-term psychosocial functioning."


The researchers identified a group of 55 teens who had undergone surgery for CLP. Like many children with CLP, they underwent multiple reconstructive surgeries to address their appearance, feeding, hearing, speech, and other functions.

The patients with CLP, along with a comparison group of 14 adolescents without CLP, completed standard assessments of anger, anxiety, and depressive symptoms. Relationships between these psychosocial outcomes and the number of surgeries was assessed. From age 0 to 14, the patients with CLP had an average of six procedures per patient.

The study also looked at the impact of the number of surgeries by age group. More than half of all surgeries were done from birth to age 7 - most commonly procedures to close the cleft lip and/or palate. In older age groups, the most common surgeries were bone grafts to augment the bone under the gums (alveolar bone grafts), which must be done before the permanent teeth start to come in.

Children with CLP undergo multiple procedures, surgical and otherwise, from infancy into adolescence. Addressing mental health is an important goal of modern, multidisciplinary CLP care. But in contrast to functional outcomes like feeding and speech, few studies have monitored the long-term psychosocial outcomes of treatment for CLP.

The total number of procedures does not appear to affect psychosocial outcomes in patients with CLP by the time they are teens, the results suggest. The researchers write, "While these conclusions may be considered positively in that patients with CLP have not been negatively impacted by more surgery, the negative aspect is that they have not demonstrated any benefit by having more surgery either."

The findings add to a previous study by Dr. Lee's group, also published in Plastic and Reconstructive Surgery®, which found that the 8- to 10-year age range is an "at-risk period for psychosocial distress in children with craniofacial anomalies," including CLP. Dr. Lee and colleagues conclude, "The significant association between multiple surgeries and psychosocial functioning suggests a need to develop strategies for modifying timing or consolidating procedures during that age range."

Pierre Robin Syndrome
Pierre Robin syndrome/Bird Facies- is genetic defect, which gives rise to a very small lower jaw, called cleft palate and a condition called as retroglossoptosis, where the tongue appears to fall into the throat
READ MORE