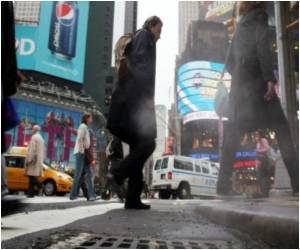 Older adults may put themselves at risk by talking on cell phones while crossing the street, researchers report in a new study. The researchers found that adults aged 59 to 81 took significantly longer than college students to cross a simulated street while talking on a mobile phone, and their heightened cautiousness in initiating crossing did nothing to improve their safety. Older adults on cell phones also were more likely to fail to cross in the time allotted for the task.

The findings, from researchers at the University of Illinois, appear in the journal Psychology and Aging.

A new study found that those seniors living in public housing fare poorly and suffer more from fatigue and chronic, related conditions than those in other community dwellings.
Advertisement

In the study, 18 undergraduate students (aged 18 to 26 years) and 18 older adults crossed simulated streets of varying difficulty while either undistracted, listening to music or conversing on a hands-free cell phone. The older adults were significantly impaired on the most challenging street-crossing tasks while also engaged in a second activity, with the most pronounced impairment occurring during cell phone conversations. The younger adults showed no impairment on dual-task performance, the researchers found.

Veterinary nutritionists at the Cummings School of Veterinary Medicine at Tufts University say that the nutritional content of dog foods marketed for old dogs varies
Advertisement
<< Death From Severe Malaria Could Be Averted With Herbs Used ...
Survey Shows Upbeat Outlook from US Millionaires >>

Nurses and Engineers Put Heads Together to Keep Seniors Moving

For those of us living the frenetic modern lifestyle, sitting in one place for a long period might seem like a vacation. But for those who are retired,

Drug Interaction Checker A-Z Drug Brands in India Blood - Sugar Chart Sanatogen The Essence of Yoga Loram (2 mg) (Lorazepam) Selfie Addiction Calculator Blood Donation - Recipients Find a Doctor Accident and Trauma Care
This site uses cookies to deliver our services.By using our site, you acknowledge that you have read and understand our Cookie Policy, Privacy Policy, and our Terms of Use  Ok, Got it. Close
×