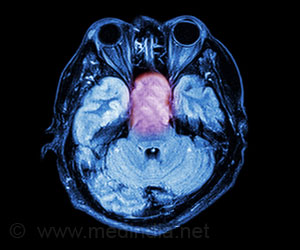 Some cells excite the immune system and others soothe it. Myeloid-derived suppressor cells (MDSCs) are one type of soothing cell, and previous work shows that cancer may specifically boost production of MDSCs as a way to tamp down immune response against tumors.

At least that's how it works in mice. Now a University of Colorado Cancer Center study published in the journal Cancer Immunology & Immunotherapy for the first time characterizes the uptick of these cells in the spleens of human cancer patients, paving the way for therapies directed against these suppressor cells that collude with cancer.

Insights into the Early Impact of Ebola Virus on Immune System

A new mouse model of early Ebola virus (EBOV) infection has shown how early responses of the immune system can affect development of EBOV disease.
Advertisement
‘Myeloid-derived suppressor cells (MDSCs) are one type of soothing cell and previous work shows that cancer may specifically boost production of MDSCs as a way to tamp down immune response against tumors.’

"I would estimate that the majority of basic immunology has been worked out in mice, specifically in the spleens of mice because they offer ready access to large numbers of lymphocytes or splenocytes. Many versions of vaccines and tumor models rely on the responses of these mouse splenocytes. But it turns out we don't know as much about human splenocytes and their immunologic importance. There's a big leap of faith that mouse models are applicable to humans," says Martin McCarter, MD, investigator at the University of Colorado Cancer Center and surgical oncologist at the University of Colorado Hospital.

How the Ebola Virus So Effectively Disables the Human Immune System

How Ebola gets around the host's cell-mediated immune response has been explored by researchers.
Advertisement
"Basically, this means that it's really easy to find and study these splenocytes in mice and really hard to get your hands on enough human splenocytes to study," says Jordan, who is assistant director of the CU Cancer Center Human Immune Monitoring Shared Resource and assistant research professor in the CU School of Medicine Department of Immunology and Microbiology. "Now with this paper we show how future researchers can isolate these human splenocytes, hopefully leading to more work in this area."

The team went an important step beyond characterizing and isolating these cells: "It's one thing to identify these cells and another to show their function," McCarter says. "We show that these cells are functionally immunosuppressive in humans, working to block T-cell responses."

When increased splenocytes blocked T-cell responses, patients suffered - in this study, higher splenocyte counts were "associated with a significantly increased risk of death and decreased overall survival," the authors discovered.

Many successful anti-cancer immunotherapies direct T cells to target tumors. For example, PD-1 and PD-L1 inhibitors prevent tumor cells from holding up a sort of biological "white flag" that disarms T cells that would otherwise target them. Another immunologic strategy called CAR-T cell therapy seeks to genetically equip T cells to recognize proteins specific to tumor tissue. Both therapies depend on T cell responses. And in both cases, a tumor's ability to spur the growth of myeloid-derived suppressor cells may blunt this response.

"In recent years, we've started to crack open the shell of the immune response to tumors. Still, there are many elements of the immune system we don't understand, for example how tumors manipulate or utilize a patient's own immune system to block the immune response against their own tissue. Now we are taking steps to understand this process, and understanding the basic science allows us the opportunity to intervene with therapies to stop it," McCarter says.

The group has already taken the obvious next step, running an investigator-initiated human clinical trial targeting myeloid-derived suppressor cells in combination with existing immunotherapies in a way that could allow immune response to go forward. McCarter, Jordan and colleagues are excited to report the results of this small trial in a forthcoming publication.

"Currently only about 20-40 percent of melanoma patients respond to these immune therapy checkpoint inhibitors for a variable amount of time," McCarter says. "By blocking or knocking down the myeloid-derived suppressor cells, we hope to improve this response rate."

IL-12, that is inhibited by the antibody ustekinumab, was observed to have a positive effect on the skin affected by psoriasis.
Advertisement
<< Enraging Noises Caused by Brain Connection Overdrive
Black, Low-Income New Yorkers Largely Shut Out of Major Aca... >>

How the Immune System Keeps 'Traitor Cells' in Lockdown

The immune system avoids attacking its own tissues with antibodies - whilst still maintaining a strong defense against invaders, suggests a new research.