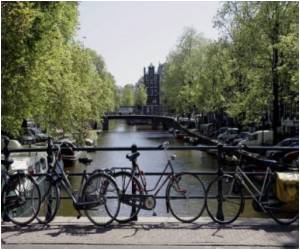 Most people are aware that mountain biking, also known as off-road biking, is a great way to stay physically active while enjoying nature and exploring the outdoors.

The good news is that mountain biking-related injuries have decreased. A new study conducted by researchers at the Center for Injury Research and Policy of The Research Institute at Nationwide Children's Hospital found the number of mountain bike-related injuries decreased 56 percent over the 14-year study period (1994 to 2007) - going from a high of more than 23,000 injuries in 1995 to just over 10,000 injuries in 2007.

"The large decline we found in mountain bike-related injuries is likely due to a combination of factors," said Lara McKenzie, PhD, principal investigator at the Center for Injury Research and Policy at Nationwide Children's Hospital. "While some of the decline may be explained by a decrease in the number of people riding mountain bikes, there have also been a number of improvements to the bicycle design, such as disc brakes and dual-suspension systems, that give the rider greater control of the bike and may help to reduce the incidence of injuries."


According to the study, appearing in the February 2011 issue of the American Journal of Sports Medicine, the most frequent diagnoses were fractures (27 percent), soft tissue injuries (24 percent) and lacerations (21 percent), while the most commonly injured body parts were the upper extremities (27 percent), shoulder and clavicle (20 percent) and the lower extremities (20 percent). Falls (70 percent) or being thrown off the bike (14 percent) were the most common mechanisms of injury.

Post Traumatic Stress Disorder (PTSD), is a mental condition triggered by a traumatic event. PTSD treatment includes pyschotherapy, behavior therapy and medications.
Advertisement
Several differences in injury patterns were found among subgroups. While the majority of injuries overall were sustained by boys and men, girls and women were more likely to sustain an injury severe enough to require hospitalization. In addition, bikers aged 14 to 19 years sustained twice as many traumatic brain injuries than bikers of other ages.

"While the number of mountain bike-related injuries has decreased, they continue to be a concern," said Dr. McKenzie, also a faculty member at The Ohio State University College of Medicine. "The gender and age differences we found represent opportunities to further reduce injuries through focused injury prevention and increasing use of protective equipment."

Data for this study were collected from the National Electronic Injury Surveillance System (NEISS), which is operated by the U.S. Consumer Product Safety Commission. The NEISS dataset provides information on consumer product-related and sports and recreation-related injuries treated in hospital emergency departments across the country.
Source: Eurekalert