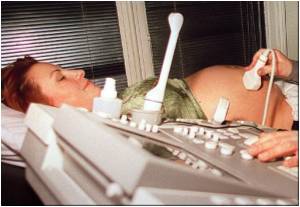 A mother's heartbeat matches with her unborn baby's, leading scientists to believe that diagnosis of health problems in the womb could be speeded up.

Scientists at the University of Aberdeen, along with colleagues in Germany, discovered the heartbeats of a mother and foetus synchronised under certain conditions.

And now, the researchers believe that the previously unknown connection could pave the way for a new technique to detect development problems in the baby during pregnancy.


They used a special machine, called a magnetocardiograph, to study the heartbeats of the women and their babies.

Although the equipment is used widely in hospitals, it is not routinely part of antenatal care and is called upon only where there may appear to be medical issues during pregnancy.

What is Antenatal care and its importance during pregnancy for mother and baby, with details on the medical test preformed during the first visit to the doctor.
Advertisement
The researchers then used cutting-edge computing technology to generate simulated heartbeats, which revealed the interaction between the mother's and baby's heartbeats.

It showed synchronisation occurred only when the mother breathed rhythmically.

For the study, volunteers were asked to breathe in time with a computer-generated clock.

They were asked to inhale and exhale in time with the clock's ticks, which were set at specific speeds.

The researchers said that if the synchronisation between mother and baby did not occur, it could signal that something might be wrong with the development of the foetus.

This would allow those caring for the women to take early action if something was found to be wrong, while the baby was still in the womb.

"We used advanced computing techniques in our research - making minor alterations to the rhythm of a computer-simulated heartbeat to reveal the connection between rhythmical breathing and heartbeat synchronisation," the Scotsman quoted Dr Mamen Romano, a researcher from the University of Aberdeen who was involved in the project, as saying.

Dr Marco Thiel, one of a team of physicists from the University of Aberdeen who worked on the study, said: "Pregnant mothers often report an awareness of a bond with their child, but until now there has been no hard evidence to suggest this bond is reflected in the interaction of their heartbeats. Our findings reveal that synchronisation between the heartbeat of a mother and foetus does actually occur - but only when the mother is breathing in a rhythmical fashion."

Safe For Mother and Baby To Exercise Till End of Pregnancy

A new study carried out by Polytechnic University of Madrid has revealed that exercising up to the end of pregnancy has no harmful effect on the weight or size of the foetus.
Advertisement
Advertisement