Most Young US Adults Expect Marriage to Last a Lifetime: Study 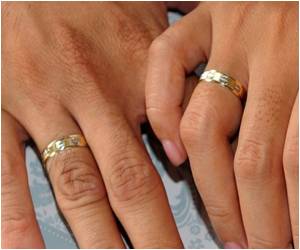 A study released Wednesday reveals eighty-six percent of young adults in the United States expect their marriages to last a lifetime, even though half of all marriages end in divorce.

The Clark University Poll of Emerging Adults also found that 57 percent of Americans aged 18 to 29 feel it is wrong for two people to have sex if they are not emotionally involved with each other.

And 73 percent of the 1,029 respondents from across the United States who participated in the study believed that couples should walk down the aisle and exchange wedding vows before having a child.

You can save your marriage - even when your partner insists on a divorce.
Advertisement
"They grow up knowing that half of marriages end in divorce, yet nearly all of them expect to be in the half that doesn't," said Arnett, who led the study conducted through mobile phone, telephone and Internet interviews.

"Of today's emerging adults, the ones with divorced parents are often the ones who are most determined to avoid divorce, even though they are statistically most likely to get divorced themselves."

The study revealed, however, that 61 percent of young American adults expect to give up some of their career goals in order to have the family life they want -- with men as likely as women to have such expectations.

"Traditionally, women have been far more likely to sacrifice career goals for family," said Arnett, whose study had a margin of error of plus or minus 3.06 percent.

"These new findings suggest that this may change in the new generation of emerging adults to a more equal sharing of family responsibilities."

Twenty-three percent of participants in the survey were married, 10 percent living with a partner and 22 percent in a "close relationship." Twenty-nine percent said they were currently in no relationship at all.

Divorce can be traumatic for children and create a sense of insecurity amongst them. Couples should realize that joined parenting is important even after divorce.
Advertisement
<< Healthy Food Choices in Employees from All Backgrounds Impr...
Vaccine Against Nipah Virus Proves Successful in Animal Stud... >>

Survey: Brits Feign 'marriages' to Bag an Upgrade on Holiday

According to a survey, a majority of Britons have lied about being engaged, or on honeymoon, in order to bag an upgrade on holiday.
Advertisement
News A-Z
A B C D E F G H I J K L M N O P Q R S T U V W X Y Z
What's New on Medindia