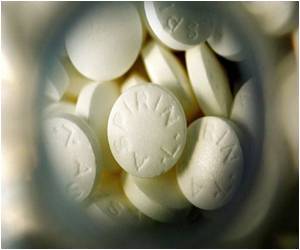 A new study has found that majority of women with cardiovascular disease do not take their recommended dose of aspirin.

"Based on this survey, it is evident that the majority of women for whom aspirin is recommended for prevention of cardiovascular disease are not following national guidelines," said Editor-in-Chief Susan G. Kornstein, Executive Director of the Virginia Commonwealth University Institute for Women's Health, Richmond, VA.

Among more than 200,000 women participating in a web-based survey to assess their risk for cardiovascular disease, only 41 percent - 48 percent of women for whom aspirin is recommended reported that they took an aspirin daily, according to the study authors, Cathleen Rivera, MD and Texas-based colleagues from Scott and White Healthcare, Navigant Healthcare Consultants, and Texas A 'n' M Health Science Center.


The women were more likely to use aspirin if they had a family history of cardiovascular disease or had high cholesterol, as reported in the article.

Heart disease is a major killer worldwide in spite of major strides in the medical field in terms of research, diagnosis, treatment and pharmacology. HIV/AIDS and Alzheimer's disease are vying for popular attention these days and people tend to sideline or neglect healthy heart awareness. Take our quiz and refresh your awareness on heart disease.
Advertisement
The authors concluded that improved educational programs are needed to increase awareness of the benefits of aspirin use to prevent heart disease among women.

The study has been published in the Journal of Women's Health, a peer-reviewed publication from Mary Ann Liebert, Inc.

Drug - Food Interactions Find a Hospital How to Reduce School Bag Weight - Simple Tips Vent Forte (Theophylline) The Essence of Yoga Drug Interaction Checker Iron Intake Calculator Sinopril (2mg) (Lacidipine) Loram (2 mg) (Lorazepam) Drug Side Effects Calculator
This site uses cookies to deliver our services.By using our site, you acknowledge that you have read and understand our Cookie Policy, Privacy Policy, and our Terms of Use  Ok, Got it. Close
×