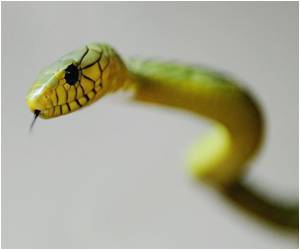 A key reason for the low count is that many snakebite victims are treated or die without seeking or reaching health facilities. A Bangladeshi study, for example, found that only 3 percent of those treated went directly to a physician or hospital. Rather, 86 percent saw a "snake charmer." Snakebite victims often do not go to hospitals because they have to travel too far, antivenom is scarce in many regions, or the treatment can be too expensive.

One of the world's leading herpetologists, Dr. Ian Simpson, is campaigning for greater awareness of the right way to tackle snakebites.
Advertisement

"People are dying in their villages without 'bothering' the health system," said Ulrich Kuch, head of the Emerging and Neglected Tropical Diseases Unit at the Biodiversity and Climate Research Centre in Frankfurt, Germany. "They simply don't show up in the statistics."


The World Health Organization estimates that up to 5 million people suffer from snakebites each year, resulting in 300,000 cases of permanent disability and about 100,000 deaths. But two recent studies reveal that the magnitude of the problem is far greater than official statistics show. One survey, published in the journal PLoS Neglected Tropical Diseases in 2011, found that 46,000 people die every year in India from snakebites, compared to the official figure of 2,000. A second survey found 700,000 snakebites and 6,000 deaths annually in Bangladesh alone, far higher than previous estimates.

How to Handle Snake Bite

If a person is bitten, running after the snake to catch it may not be a good idea.Here are some tips that would guide you in the event of snake bite!
Advertisement
"In the 21st century, snakebite is the most neglected of all the neglected tropical diseases," said David Warrell, emeritus professor of Tropical Medicine at the University of Oxford, United Kingdom, and one of the study's authors. "The deaths and suffering from venomous snakebites remain largely invisible to the global health community."

While just a handful of people in the United States die each year from snakebites, venomous snakebites greatly afflict the most impoverished people in rural areas in low- and middle-income countries. As many people die from snakebites as from several recognized neglected tropical diseases, and, similarly, snakebites also lack the support of major foundations, development agencies and global leaders, according to Warrell. If the bitten survive, they often are permanently disabled by the effect of the toxins in the venom.

"Neglected tropical diseases too often hold people and their families and communities hostage to poverty," said Peter J. Hotez, MD, PhD, president of ASTMH and a noted tropical disease expert. "Investing in research for answers that will bring an end to needless suffering, through adequate cures and life-saving health programs, is a smart investment for funders, both private and public."

In the absence of significant global initiatives, scientists, research institutions and community-based organizations are taking it upon themselves to develop solutions in Asia, sub-Saharan Africa and Latin America, the world's most-affected regions. These latest developments were presented at the symposium.

One successful program uses volunteer motorcycle drivers to rush victims in southeastern Nepal to a community-based snakebite treatment center. Data presented at the conference showed that the program substantially reduced the snakebite death-ratefrom 10.5 percent to 0.5 percent, compared to no decrease in other villages surveyed. "It actually seemed too good to be true," said François Chappuis, Associate Professor in the Division of International and Humanitarian Medicine at Geneva University Hospitals.

The program began in 2003 after a study found that 80 percent of deaths due to snakebites in villages surveyed occurred outside a medical center and that half of those victims died on the way to the health facility. So researchers established a program where volunteer motorbike owners race snakebite victims 24-hours-a-day to the Damak Red Cross Health Center for fast medical care. They also launched an educational campaign where Nepalese residents met with villagers and community health workers and distributed leaflets in the most affected villages. "The message was extremely straightforward: you get bitten, you call a motorcycle volunteer and you go as fast as possible to the medical center," Chappuis said. The program was expanded to 40 villages and in 2011 began in south central Nepal with hopes of it being replicated in India.

Scientists also presented promising data on rapid diagnostic tests being developed to allow physicians to make fast decisions on whether to give antivenom and which type to use. Currently, standard practice is to wait until symptoms of envenomation appear before giving antivenom because it can have serious side effects and supply is scarce. This is reasonable in many cases. However, the venom of certain species irreversibly destroys parts of the nervous system before envenomation becomes clinically apparent, making the resulting life-threatening paralysis resistant to antivenom treatment. With a 20-minute strip test that shows if venom was injected and by which species, doctors can give antivenom immediately after such bites, before patients become severely ill or die. The tests are easy to use in rural, poor settings.The tests discussed at the forum would detect bites from two deadly snakesthe Russell's viper and the krait. The krait test is in preliminary stages for potential use in South Asia. The Russell's viper test successfully completed preclinical testing with a clinical trial expected in 2012. It has been designed for Burma with plans to adapt it for wider use throughout South and Southeast Asia.

In addition, researchers discussed their progress on the development of cheaper, effective antivenoms, which are scarce or nonexistent in some parts of the world, or are too expensive.

The nonprofit Instituto Clodomiro Picado (ICP) of the University of Costa Rica has teamed up with governments, manufacturers and world-renowned universities and research institutionsincluding Oxford, the University of Melbourne, Instituto de Biomedicina of Valencia, Spain, and Liverpool School of Tropical Medicineto develop new antivenoms for sub-Saharan Africa and Asia.

One is for the taipan of Papua New Guinea, one of the most venomous snakes in the world. Though a good Australian antivenom exists, it is scarce in Papua New Guinea because of its very high price. The new antivenom for Papua New Guinea, at a fraction of the cost, successfully completed laboratory and animal testing, with the results published in 2011 in PLoS Neglected Tropical Diseases. A clinical trial will start this year.

This comes on the heels of two new effective antivenoms panelists worked on that are starting to be distributed in Nigeriaone for the saw-scaled viper and a "polyspecific" antivenom that works for three snakes. One is being manufactured in the UK and the other at ICP in Costa Rica, which would also produce the antivenom for Papua New Guinea.

But a new project presented at the ASTMH forum takes a different approach. The ICP will help formulate a polyspecific antivenom for five snakes in Sri Lanka and then transfer the technology to Sri Lanka for local production. The ICP is collaborating with the University of Peradeniya in Sri Lanka and a US-based non-profit, Animal Venom Research International, said José María Gutiérrez, PhD, head of the Research Division of ICP and Professor at the University of Costa Rica.

"These new antivenoms show how international partnerships between organizations that have different strengths can work together and solve problems in diverse parts of the world," he said.

Developing Countries Get New Hope Thanks to New Low-Cost Antivenom

It has emerged that the development of a new low-cost antivenom against a lethal snake could encourage many developing countries, such as Papua New Guinea, to produce their own.
Advertisement
Advertisement
This site uses cookies to deliver our services.By using our site, you acknowledge that you have read and understand our Cookie Policy, Privacy Policy, and our Terms of Use  Ok, Got it. Close
×