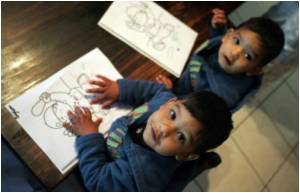 Thanks to the financial squeeze most families are facing, parents are spending less than an hour a day with their children.

In a bid to spend more time at work in order to earn more, parents are missing out on quality time with their families.

does not teach children new behaviours or what to do in place of the problem behavior.
Advertisement

On an average, they spend only 49 minutes in a day with their kids, according to figures.


Research suggested that rising numbers of "pound sign parents" only valued activities that cost money - leaving children to themselves at other times.

It giggles and wiggles its feet when you shake its rattle, but will get cranky and cry from too much tickling: Meet Yotaro, a Japanese robot programmed to be as fickle as a real baby.
Advertisement
A survey of 3,000 parents and 1,000 children, ahead of National Family Week has concluded that work pressure during recession is the biggest cause of this trend.

The event - staged next week - has been organised by a series of organisations including the NSPCC, the National Federation of Women's Institutes and the National Literacy Trust to encourage families to spend more time together.

Graham Gorton, chairman of the Independent Schools Association, said many mothers and fathers believed they were "failing as parents" if they were unable to provide state-of-the-art computer games, televisions and toys for sons and daughters.

Ten percent families spend no more than two hours with their kids, while a third of all parents think quality family time costs money and an astonishing 68 per cent of parents see money as the biggest barrier to spending more time with their family.

"Over recent decades we seem to have created a 'must have' culture amongst our young people.

"Many see that they may be perceived to be failing as parents if they do not ensure that their children have the latest gadgets and electronic devices along with their peers.

"Many parents also, I suspect, feel pressured to enrol their offspring into every conceivable club or after school activity that is available, including through the weekends," The Telegraph quoted Gorton as saying.