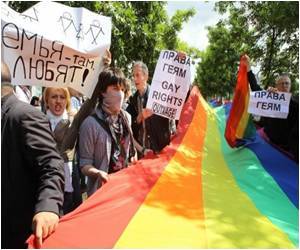 The Moscow event has been authorised to include 500 people, the organiser said.

The Spanish city of Barcelona will erect a monument to gays, lesbians and transgendered people who have been persecuted and repressed throughout history , it announced Thursday.
Advertisement

Separately, officials in Saint Petersburg said they will allow a similar demonstration to take place in Russia's second city on May 1. The country's imperial capital allowed its first gay rights parade in November.

Luzhkov was sacked from his post for officially losing the president's trust at the end of last year, with officials having since adopted a more lenient policy toward opposition groups.

Nearly Half of US Gays Unaware of Their HIV Infection

One in five gay men living in 21 major US cities are infected with the AIDS virus and nearly half are unaware of it, the Centers for Disease Control and Prevention (CDC) said in a study.
Advertisement

Suicide - A Big Risk Among Bullied Gays and Lesbians

Gays and lesbians who are bullied are at increased risk of suicides due to disruptions in their hormones and associated cardiovascular problems.
Advertisement
This site uses cookies to deliver our services.By using our site, you acknowledge that you have read and understand our Cookie Policy, Privacy Policy, and our Terms of Use  Ok, Got it. Close
×