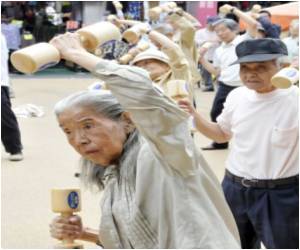 Elderly people have more opportunity to watch TV compared to children and teenagers, yet they don't enjoy it as much, reports a new study.

Researchers at the Stein Institute for Research on Aging and Rady School of Management at the University of California, San Diego School of Medicine asked participants how they spent their time and describe their experience of everyday activities.

The results showed that adults over 65 reported spending three times more of their waking hours watching TV than did younger adults. They also didn't find TV a stress buster like teens did.


Television use in particular has been linked with greater risk for obesity and Type2 diabetes, lower life satisfaction, less frequent engagement in social and physical interaction, and increased risk for dementia.

Ageing is referred to the accumulation of changes that brings a person closer to death.
Advertisement
The findings came as a surprise to the team who expected that older adults enjoyed TV more than younger ones do, because they have fewer demands on their time.

The researchers concluded that increasing public awareness of alternatives to TV watching and reducing barriers to alternative activities that are more socially and physically engaging could reduce TV use in older people and diminish the potential for associated negative health effects.

The study is published in the August issue of the American Journal of Preventive Medicine.

Seniors Can Grasp New Concepts And Maintain What They Have Learned!

The idea that cognitive function declines in old age has been suggested by many studies. But a new study led by a Ryerson University researcher shows that this is not always the case.
Advertisement
Advertisement
This site uses cookies to deliver our services.By using our site, you acknowledge that you have read and understand our Cookie Policy, Privacy Policy, and our Terms of Use  Ok, Got it. Close
×