More Than 500 Affected By Encephalitis In Uttar Pradesh 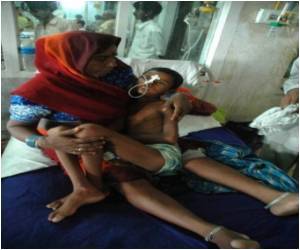 An whopping 550 people has been affected from an outbreak of encephalitis in Uttar Pradesh, according to reports.

In Gorakhpur district, a government hospital confirmed admitting 550 people with encephalitis on Thursday, and also said that it was short of beds.

The death toll due to the Japanese Encephalitis continues to daily kill a few more people in Uttar Pradesh and seems to be spreading to the neighboring areas like Nepal.
Advertisement

Brijesh Yadav, a relative of a patient, said that more than one child is being treated on one bed.


According to doctors, the death rate due to encephalitis is 28 to 56 percent. And unfortunately, those who survive may have to endure life as mentally or physically challenged persons.

"We have the highest number of patients admitted in one day, which is 550 patients. We have never got such figures in the past. In the current cases of encephalitis, the children not only have swelling in their brains, but their skin, kidney, liver and heart also show swelling. Therefore, all the parts of their bodies are not functioning properly," he said.

Meanwhile, Congress leader Jagdambika Pal, who visited the hospital, said he was shocked to see the condition of the children.

"It is so difficult to believe what we are seeing here that the children in huge number are becoming prey to Japanese encephalitis. The condition here is so bad that one cannot even imagine that it is the worst epidemic. The irony is that there is no cure to AES (acute encephalitis syndrome) in the whole world," he said.

Encephalitis symptoms include headache, fever, convulsions, drowsiness, fatigue and the inflammation of the brain.

Gorakhpur Officials may Opt for Fish and Homeopathy to Treat Encephalitis

Administrative officials in Gorakhpur division of Uttar Pradesh are considering homeopathy and fish to treat the recent encephalitis outbreak.
Advertisement
<< Statins Can Be Used to Prevent Cancer: Study
Minor Stroke Can Cause Serious Disability >>

Sinopril (2mg) (Lacidipine) Color Blindness Calculator Calculate Ideal Weight for Infants How to Reduce School Bag Weight - Simple Tips Drug - Food Interactions Diaphragmatic Hernia Drug Side Effects Calculator Post-Nasal Drip Find a Doctor Sanatogen
This site uses cookies to deliver our services. By using our site, you acknowledge that you have read and understand our Cookie Policy, Privacy Policy, and our Terms of Use