More Than 17,000 Vie to Be Chinese Panda-Keeper For a Month 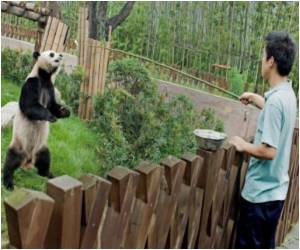 In less than two weeks from when the competition was launched, more than 17,000 people from around the world have entered a contest to become a panda keeper for a month in China, organisers said Friday.

"Project Panda," launched by the Chengdu Panda Base in the southwestern province of Sichuan and the WWF, aims to give the contest's six winners a chance to study panda behaviour for one month.

While a dog is said to be man's best friend, it may soon turn a saviour of endangered giant pandas also, says an expert.
Advertisement

The keepers will witness the birth of baby pandas and trek in the mountains around Chengdu, Sichuan's capital, to study wild pandas.


They will also have to keep a blog about their experiences, to help raise awareness of the endangered animal's plight.

According to www.pandahome.com, the website where animal lovers can apply for the position, a total of 17,114 people have so far entered the contest, ahead of the September 6 deadline.

Li Hanwei spent her schooldays memorising tens of thousands of the intricate characters that make up the Chinese writing system,like every Chinese child.
Advertisement
A panel of experts will select 12 finalists, which they will then whittle down to six winners at the end of September.

Videos posted on the website by applicants who want the position show they come from countries such as the Netherlands, South Africa and Japan -- as well as China.

There are just 1,600 pandas left in the wild and nearly 300 others are in captive-bred programmes worldwide, mainly in China, according to official reports.

A new study has found that access to the Internet is as widespread in China, home to the world's largest online population, as it is in developed nations.
Advertisement
<< Tokyo's Disney Parks Reach the 500 Million Mark
Healthy Antioxidants From Black Rice as Good as the Ones in... >>

2 Million Lives Will be Lost to Smoking Each Year in China: Experts

More Than 17,000 Vie to Be Chinese Panda-Keeper For a Month Personalised Printable Document (PDF)