More People are Returning to China After Studies Abroad 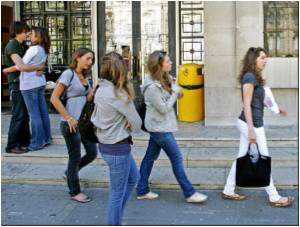 Molecular biologist Shi Yigong did not have any second thoughts of staying back and pursuing a dream academic career in The US, despite holding the coveted position of Princeton University professor with a huge annual research funding of more than two million dollars.

But Shi did exactly what China's leadership hopes to see more of -- he turned his back on all that to return to his homeland after two decades abroad.


The recent return of people like Shi, who now heads the life sciences department at Tsinghua University in Beijing, has provided a ray of hope for China in its uphill battle to reverse a long-term "brain drain" of top experts.


"China has contributed disproportionately to the advancement of science and technology in the United States, for example," Shi said of the steady stream of China's best and brightest who left for greener pastures in decades past.

"Behind China's shiny glass skyscrapers, it has an extreme shortage of top talents and that is really regrettable."

With aspirations of becoming a science and technology power, China has tried for years to halt an exodus of top minds, a lingering legacy of the 1966-76 Cultural Revolution when campus upheavals closed universities for years.

The chaos severely set back Chinese science and academia. Afterwards, many of China's best and brightest -- with official encouragement -- opted for study abroad, where most have stayed. Many took foreign citizenship.

But Shi, 43, said China's growing clout and rapidly modernising research institutions make it an increasing draw for returning scholars, known here as "sea turtles" swimming back to their home beaches.

"For talented people to apply their talents, the sky is the limit now in China in terms of innovation," Shi told AFP after a tour of a lab where he studies cell proteins, with possible implications for cancer drug development.

The "sea turtle" response, however, has been weak so far.

One current programme offers recruits a basic one million yuan (147,000 dollars) in government funds -- plus additional money from their employers and other sources.

The government this year promised even more attractive policies in the future in its bid to close the technology gap with the West.

The issue resonates in China. Nationalist pioneer Sun Yat-sen and later revolutionaries like Deng Xiaoping and Zhou Enlai, among other notables, were educated or radicalised abroad before returning to shake the halls of power.

They include rampant research plagiarism, a lack of political autonomy at universities, and a sclerotic academic system marked by infighting and an overemphasis on connections, which stifles innovation.

"You have a large number of incompetent scientists that get lots of funding because they work the system," said Rao Yi, who returned in 2007 from a top research position at Northwestern University to head life sciences at Peking University.

Shi and Rao have spoken out for change. They authored a commentary in the government mouthpiece, the People's Daily, in February urging reforms such as more independence for universities.

But accusations and insults have followed such suggestions, said Shi, who admits it has been a "tough adjustment."

"Suffice to say that my last two and a half years, in terms of dealing with the media and the blogosphere, were not enjoyable," he said.

Cong Cao, a professor of international relations at the State University of New York and an expert on the Chinese academic elite, says China has the "hardware", in terms of research facilities, to succeed.

"But in terms of the software -- whether the system is really ready to produce first-class work -- I'm still not sure," he said.

Rao, who is renouncing his US citizenship to retake a Chinese passport, said patriotism was only a small factor in his return.

"It's more a question of what side of history you want to be on," he said, noting China's rise.

But it will be decades until China rivals the West in innovation, he adds.

"If you look at the curve, in 20 years we could be doing pretty well. But if we don't solve some of the structural problems, maybe we won't go very high, but rather get stuck somewhere in the middle."

Israeli Formula to Reverse American Brain Drain
An Israeli specialist has come up with a new formula that can prove as the sure shot way to woo back America's top scientists, academics and biotech executives who have left the country
READ MORE

Reverse Brain Drain in Indian Health Sector
Many Indian doctors serving abroad are seen making a comeback to home turf, in what is being labelled as reverse brain drain.
READ MORE

UN Report Points to the Negative Influence of Brain Drain on Health Sector in India
New York: A new study enabled by the United Nations has highlighted the negative impact of migration of professionals in the medical field to foreign lands, especially from countries like Africa
READ MORE