Montreal to Host Concert to End AIDS, Tuberculosis and Malaria

A free concert will be held in Montreal in September aimed to end AIDS, malaria and tuberculosis. US R&B star Usher and Canadian indie rock groups Metric and Half Moon Run will perform at the concert.

Advocacy group Global Citizen, the concert sponsor, said the September 17 show would be held at the city's Bell Centre a day after an international donor conference to raise money for the fight against the epidemics.


Global Citizen said that some 10,000 tickets will be distributed to anyone who has helped in the fight by signing a petition or writing to a lawmaker to urge them to support the fund.


‘The concert is being presented by Denmark-based Global Citizen and The Global Fund, an international partnership dedicated to eradicating AIDS, tuberculosis and malaria.’


Prime Minister Justin Trudeau is scheduled to attend the concert.

Trudeau is hosting the Global Fund Replenishment conference in Montreal on September 16.

The fund is mainly supported by governments and spends nearly US$4 billion annually in its fight to eradicate HIV/AIDS, malaria and tuberculosis by 2030.

The organization has set a fund-raising target of US$13 billion for its next three-year cycle, from 2017 to 2019.

Canada has already pledged about US$600 million for the coming three years. Other countries that have offered aid include Japan, at US$800 million, and France, at US$1 billion.

United Nations Plan to End AIDS by 2030, Faces Resistance by Russia
UN member-states agreed to fast-track their response to end the AIDS pandemic by 2030 despite a last-minute bid by Russia to dilute efforts.
READ MORE 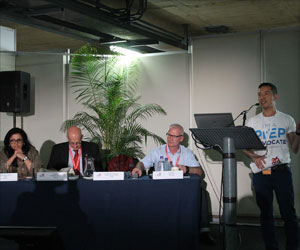 United Nations New Political Declaration to End AIDS Epidemic by 2030
More than 80% of the anti-retroviral drugs for treating HIV/AIDS are supplied by the Indian pharmaceutical industry and they have helped save millions of lives.
READ MORE

India and Africa Will End AIDS As a Public Health Threat by 2030: J.P. Nadda
India has shown an overall reduction of 57% in new HIV infections in the past decade which shows potential of ending AIDS in the country by 2030.
READ MORE