Monkeys can also Recall What They Have Seen 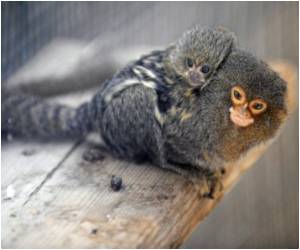 A study has suggested that monkeys too can recall and reproduce simple shapes from memory just like humans.

The finding may help us understand the evolution of memory and other cognitive abilities and could be applied to better diagnosing and treating memory impairments in humans.


"Our observations of recall in Old World monkeys suggest it may have been adaptive in primates long before humans evolved, and that it does not depend on language or anything else that is uniquely human," said Basile.

Schizophrenia is a mental disorder characterized by symptoms of thought, behavior and social problems.
Advertisement
"We believe we have found a new method for testing animals that opens a whole new window into the world of nonhuman memory research," he said.

"For the first time, monkeys can actually show us what they recollect, and their test results are directly comparable to human tests," he added.

Previous research has established the ability of monkeys and many other animals to recognize objects. The lack of language, however, has thwarted efforts to test recall in nonhumans.

The Emory researchers overcame the language barrier by teaching the rhesus monkeys to "draw."

The monkeys were shown simple two- and three-box shapes on a computer screen.

Later, they were presented with a computer touchscreen that allowed them to recreate those shapes by touching the corresponding areas of a grid.

The monkeys learned through trial and error that reproducing the shapes they had seen previously would bring a food reward. Once trained, the monkeys were able to transfer their memory skills to novel shapes.

The performance of the monkeys on the computer touchscreen paralleled that of humans using the Rey-Osterrieth Complex Figure Test, a standard human recall test, in which subjects draw a complicated shape from memory.

"But we've shown that for simple shapes, monkeys have a pattern of performance for recognition and recall that mirrors that of humans. And their ability to immediately transfer their performance to new shapes suggests we're tapping into some general cognitive capacity. With this type of information, we are moving closer to better diagnosing and developing treatments for memory impairments in humans," he added.

The researchers speculate that recollection might help monkeys return to out-of-sight places where they previously found food, or to flexibly plan social interactions with other monkeys based on previous behavior.

The finding appears in the journal Current Biology.

Alzheimer''s disease is a progressive neurodegenerative disease affecting memory and thinking and making the person increasingly dependent on others.
Advertisement
<< Research Reveals How Data Helps to Know People's Mind
Tornado Victims Being Reunited by Facebook >>