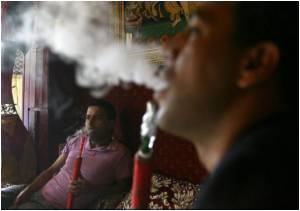 An online study published June 29 in the Journal of The National Cancer Institute says that smoking, an established risk factor for colon cancer, may induce specific epigenetic changes and gene mutations that may be involved in the development of colon cancer

To explore the molecular pathways of smoking-related colorectal cancer, Paul J. Limburg, M.D., of the Mayo Clinic, and colleagues, evaluated smoking patterns among women in the Iowa Women's Health Study (IWHS), who were between the ages of 55 and 69 years. They looked at the age at which women started smoking, the average number of cigarettes per day and per year.


The researchers sent a questionnaire to the 98,029 women enrolled in IWHS as of January 1986, to which 43% or 41,836 women responded. Non-smokers constituted 66% of the respondents, with 34% identifying themselves as active or former smokers.

Encyclopedia section of medindia briefs you about the History of Tobacco
Advertisement
The researchers found that there was only a modest association between cigarette smoking and overall colorectal cancer incidence but that smoking was strongly associated with a certain subtype of colorectal cancer, namely tumors that had high levels of microsatellite instability (MSI), epigenetic changes (alterations that do not affect the DNA sequence), and BRAF mutations.

The authors write that the results "have provided additional support that cigarette smoking is a risk factor for colorectal cancer but further indicate that the smoking-related risk may pertain to specific molecularly defined colorectal cancer subtypes that develop through epigenetically mediated carcinogenic pathways."

Furthermore, they write: "These findings indicate that epigenetic modification may be functionally involved in smoking-related colorectal carcinogenesis."

The sub-type of colorectal cancer that emerged in the study is more prevalent among older women, making them a rich sample pool for studies. However, for that same reason, the authors caution against generalizing the results to the general public.

The study could have important clinical implications: "Emerging colorectal cancer screening technologies, such as stool assays that are based on methylation markers [signs of epigenetic changes] might be particularly informative for patients with a history of prolonged tobacco use," the authors write.

In an accompanying editorial, C. Richard Boland, M.D. and Ajay Goel, Ph.D., of Baylor University Medical Center, write: "The most important message to take from the study by Limsui et al. is that colorectal cancer is a complex collection of diseases and that causation might be different for each of the categories. Cigarette smoking is associated with a specific subset of these tumors."

Boland and Goel point out that although there is a lot to understand in terms of how smoking interacts with other environmental factors, such as diet, in causing colon cancer, "the methylation pathway is particularly interesting because epigenetic changes, unlike point mutations and chromosomal rearrangements, are potentially reversible. Our task now is to understand how to translate these findings into improved screening and prevention-based strategies."

A colon polyp is a fleshy growth on the inside of the colon, also called the large intestine. In general, the ...

In the recent years epigenetics represents inheritable changes in gene expression that do not include DNA ...