Modi's Clean India Mission Can Stop Up to 3 Lakh Deaths: WHO

"As the initial results of a WHO modelling study on the health impact of the Swachh Bharat Mission Gramin (SBM-G) outline, India's accelerated coverage of safe sanitation services, and its determination to end open defecation, will have a substantial effect on the burden of diarrheal disease and PEM by reducing mortality and accumulative Disability Adjusted Life Years (DALYs)," said WHO quoting Poonam Khetrapal Singh, Regional Director for South-East Asia.

According to WHO, the Swachh Bharat Mission could result in over 14 million more years of healthy life in the period measured, with the benefits accruing yearly thereafter.


"That is especially remarkable given that before 2014 unsafe sanitation caused an estimated 199 million cases of diarrhea annually, with modeling showing the problem will almost be eliminated when the universal use of safe sanitation facilities is achieved," she added.

According to Ministry of Drinking Water and Sanitation, sanitation coverage in rural India, under the Swachh Bharat Mission rose to 85 percent with 7.4 crore toilets built across rural India. As a result over 3.8 lakh, villages and 391 districts were declared Open Defecation Free (ODF) this year. 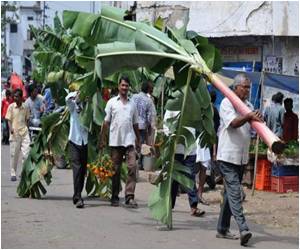 Clean India is Best Tribute to Mahatma Gandhi: PM
Prime Minister Narendra Modi said that a clean India was the best tribute that could be offered to Mahatma Gandhi's memory, even as various ministries in the government kicked off their respective Swachh Bharat Abhiyan drives.
READ MORE