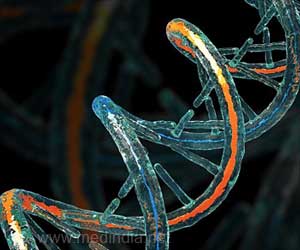 Modified CRISPR gene editing tool could aid to develop fast-track therapies for HIV, sickle cell disease and, potentially, other immune conditions, according to the study published in Scientific Reports.

City of Hope researchers may have found a way to sharpen the fastest, cheapest and most accurate gene editing technique, CRISPR-Cas9, so that it can more successfully cut out undesirable genetic information.

"Our CRISPR-Cas9 design may be the difference between trying to cut a ribeye steak with a butter knife versus slicing it with a steak knife," said Tristan Scott, Ph.D., lead author of the study and a staff research scientist at City of Hope's Center for Gene Therapy.


‘Modified CRISPR gene editing could sharpen the genetic scissor, ultimately leading to new or improved therapies for genetic disorders which could cause premature deaths.’
Read More..


"Other scientists have tried to improve CRISPR cutting through chemical modifications, but that's an expensive process and is like diamond-coating a blade. Instead, we have designed a better pair of scissors you can buy at any convenience store."

This is the first time scientists have systematically gone through the guide RNA sequence to change it and improve CRISPR-Cas9 technology, Scott said. The Kevin Morris Lab at City of Hope has filed a patent application claiming this improved CRISPR-Cas9 design, which could result in a doubling of activity but the exact amount was dependent on the target site, Scott said.

This study is just one of the many ways City of Hope, a world-renowned independent research and treatment center for cancer, diabetes and other life-threatening diseases, is helping to enable precision medicine. Its researchers are building foundational blocks that equip gene therapies with tools that work better.

The downstream effects could be more "clean" results in cell and mouse model experiments aimed at developing new therapies because the target that was "knocked out" was more successfully removed. More pronounced results could quicken new therapies from the laboratory to patients' bedsides.

In theory, the therapeutic product should have more successful cuts, which could translate into an improved therapy, but further research is needed. The exact mechanics of why this change to the CRISPR system improves gene editing still needs to be determined.

The researchers experimented on cells by making changes to the "trans-activating CRISPR RNA" (also known as "tracrRNA"), which is derived from Streptococcus pyogenes bacteria and is a part of the components used to guide the genetic scissors (Cas9) to the right gene sequence.

Streptococcus pyogenes Cas9 is the mostly widely used genetic scissor. The scientists used an RNA protein system because it gives a burst of activity that disappears about 12 hours after being introduced into the cell, which means there's a decreased chance of accidentally editing the human genome later, after the "fix" has been made, Scott said.

They found that the modified tracrRNA improved the silencing of certain genes by increasing desirable mutations in the genetic material. In this study, the target was an essential component of HIV's lifecycle, the protein CCR5 on immune CD4+ T-cells -- a current target in clinical trials seeking to re-engineer a person's immune system to be resistant to HIV. The modified tracrRNA improved cutting at this site and inactivation of CCR5, and hopefully that will translate into better protection for the immune system.

The new design was also better at improving activity at the HBB gene and the BCL11A site, both of which are tied to sickle cell disease and are being targeted in order to develop therapies for the currently incurable blood disease that causes intense pain and premature death.

"If this line of research remains consistent and we can dependably sharpen the genetic scissor, the result could eventually be new or improved genetic therapies," Scott said, adding that his team is at the beginning of this long scientific process.