US-based drugmaker Moderna's covid-19 vaccine caused allergic reactions after vaccination in people from one lot of the company's Covid-19 vaccine, a report given by the California's health department.

The company is "fully cooperating" with the California Department of Public Health (CDPH) in investigating these reported adverse events, Moderna said on Tuesday.

The confirmation comes after California State Epidemiologist Dr Erica Pan on Sunday recommended halting the administration of lot 41L20A of the Moderna Covid-19 vaccine due to possible allergic reactions that are under investigation.


‘Moderna, a US-based drugmaker received a report from California's health department that several individuals at one vaccination center in San Diego developed allergic reactions after first shot of covid-19 vaccine.’


"A higher-than-usual number of possible allergic reactions were reported with a specific lot of Moderna vaccine administered at one community vaccination clinic. Fewer than 10 individuals required medical attention over the span of 24 hours," said Dr Pan.

"Out of an extreme abundance of caution and also recognizing the extremely limited supply of vaccine, we are recommending that providers use other available vaccine inventory and pause the administration of vaccines from Moderna Lot 041L20A until the investigation by the Centers for Disease Control and Prevention (CDC), U.S. Food and Drug Administration (FDA), Moderna and the state is complete."

All appeared to be experiencing a possible severe allergic reaction during the standard observation period -- a type of adverse event that the CDC reports some people have experienced when receiving a Covid-19 vaccine.

The vaccine site switched to another lot of Moderna vaccine after closing for a few hours.

Moderna said that it is unaware of comparable clusters of adverse events from other vaccination centers which may have administered vaccines from the same lot, or from other Moderna lots.

"Moderna confirmed that a total of 1,272,200 doses were produced in batch number 041L20A, with nearly a million doses (964,900) already distributed to approximately 1,700 vaccination sites in 37 states," the company said in a statement.

While Moderna said it does not know how many doses may have ended up in the arms of people, it did report that the lot was shipped between January 4-8, and thus it expects that a significant portion of the distributed doses have already been used.

"The review confirmed that all criteria for product release of lot 041L20A were met," the statement added. 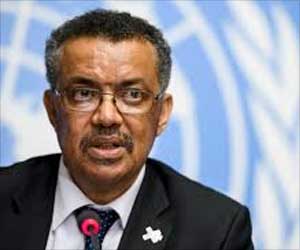 World Faces 'Catastrophic Moral Failure' Cause of Covid Vaccine: WHO Chief
World Health Organisation's (WHO) chief Tedros Adhanom Ghebreyesus said that the world is on the brink of a catastrophic moral failure - and the price of this failure will be paid with lives and livelihoods in the world's poorest countries.
READ MORE

Mild Infection, a Good Sign You're Responding to Covid Vaccine
AIIMS Director Dr. Randeep Guleria said that mild infection or adverse reaction after vaccination is a good sign, as it shows that your immune system is reacting to the vaccine and creating antibodies.
READ MORE