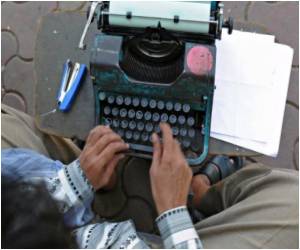 Purushottan H. Sakhare perches on a wall by a Mumbai pavement, slips a sheet of green paper behind the roller of his battered typewriter and winds it into position with two deft flicks of the wrist.

After pulling the carriage release lever towards himself, he punches the worn, black keys, the swift and precise movements of his fingers sending the slender metal typebars slamming into the black ink ribbon.

Short work weeks, enviably long lunches and vacations their American or Japanese counterparts can only dream of: French labour conditions are well-known to be among the most generous in the world.
Advertisement

Soon, the form he's typing is ready to be authenticated with a wax seal and rubber stamp by one of the dozens of notaries waiting for passing trade under the colonnade entrance of the Mumbai Metropolitan Magistrates Court over the road.


"A typewriter is perfect for this kind of work," said the 46-year-old, looking up from the ageing Underwood model on a makeshift desk in front of him.

A new cross-cultural study has shown that societal and technological changes do affect children's thinking skills.
Advertisement
"It's fast and immediate."

More than a dozen unofficial petition writers like Sakhare can be found hunched over portable typewriters on the same busy pavement, the sound of their work drowned out by the noisy traffic of India's financial hub.

Inside the court precincts, a similar number of workers can be found under a flimsy, corrugated iron lean-to, typing affidavits, family title deeds and court applications for 10 rupees (22 US cents) per page.

Typewriters have largely been consigned to history in many countries and might be expected to have also been sent for scrap in Mumbai, where India does business with the world and the latest technology drives the country's economic boom.

But the unmistakeable clatter of typewriter keys and ping of margin bells can still be heard, echoing down the vaulted corridors of the courts and lawyers' chambers to police stations and government offices across the city.

Santosh Pratap Sangtani, from the Bombay Typewriter Company, is thankful that the sturdy machines that were a feature of business from the late 19th century through most of the following 100 years have not yet become museum pieces.

India once manufactured around 150,000 typewriters every year but five years ago he was unsure whether there would still be a demand for his services, as typewriter factories closed and the take-up of information technology increased.

"A lot of the resurgence has to do with the government," he said in his dusty first floor workshop above a busy side-street near the city's main railway station and post office.

"They have said that if you want a government job, you have to first learn how to type on a typewriter and produce a course certificate. Only then can you move on to a computer. Typing institutes that closed have now reopened."

With new typewriters unavailable, the Bombay Typewriter Company and others like it now make money by selling reconditioned machines for up to 6,000 rupees (over $130) each.

Work on the hulks of Woodstock, Remington, Godrej and Facit models usually involves metal bashing and oiling or replacing the English, Hindi and Marathi keys, typebars, levers and rollers with specially-made parts.

Like the court typist Sakhare, Sangtani believes the machines still have a place in modern India, despite a push to increase the use of computers and digitise the slow-moving state sector, where form-filling by hand is still largely the norm.

"Nowadays people who use computers use only a single finger. Ten minutes' work takes half an hour. When you learn to touch-type on a typewriter, you use all your fingers and it's quicker," he said.

Users, many of them older and with an emotional attachment to their machines, also vouch for their preference for typewriters over new-fangled computers because of their low maintenance costs and simplicity.

The machines are also an ideal tool in a country where some 400 million people lack regular electricity and where power cuts can be daily occurrences where it is available.

Nevertheless, Mumbai's professional typists and repairers are realistic. The cost of computers is falling and more Indians are getting online, including through their mobile phones.

"I think the situation will last for another four to five years," said Sangtani. "After that, who knows?"

Modern Life Make It Hard for Brits to Balance Everything

More than half of the UK adult population feel they are unable to balance work, health, relationships due to the pressures of modern life, a new survey has found.
Advertisement
<< Ancient Food of the Incas 'Health Food of the Future': Nutr...
Happiness Survey To Measure How Much Brits Are Satisfied Wi... >>

Once upon a time, school bags were used to carry a few books, pencils and a lunch box. But today's school bags are not without a laptop, an iPod and a few other cool gadgets.
Advertisement
News A-Z
A B C D E F G H I J K L M N O P Q R S T U V W X Y Z
What's New on Medindia