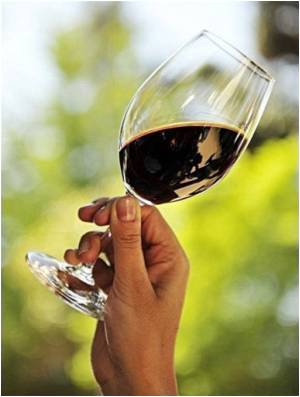 The study, published online in the Journal of Women's Health, challenges the widely-held belief that all types of alcohol consumption heighten the risk of developing breast cancer. Doctors long have determined that alcohol increases the body's estrogen levels, fostering the growth of cancer cells.

But the Cedars-Sinai study found that chemicals in the skins and seeds of red grapes slightly lowered estrogen levels while elevating testosterone among premenopausal women who drank eight ounces of red wine nightly for about a month.

Breast cancer is one of the leading causes of cancer deaths among women. It is often said that a woman who breast-feeds is at a lower risk of developing cancer compared to another who does not .Are these mere old wives tales or is there some truth in it? This quiz on breast cancer has all the details.
Advertisement
"If you were to have a glass of wine with dinner, you may want to consider a glass of red," said Chrisandra Shufelt, MD, assistant director of the Women's Heart Center at the Cedars-Sinai Heart Institute and one of the study's co-authors. "Switching may shift your risk."

Shufelt noted that breast cancer is the leading type of women's cancer in the U.S., accounting for more than 230,000 new cases last year, or 30 percent of all female cancer diagnoses. An estimated 39,000 women died from the disease in 2011, according to the American Cancer Society.

In the Cedars-Sinai study, 36 women were randomized to drink either Cabernet Sauvignon or Chardonnay daily for almost a month, then switched to the other type of wine. Blood was collected twice each month to measure hormone levels.

Investigators said the change in hormone patterns suggested that red wine may stem the growth of cancer cells, as has been shown in test tube studies.

Co-author Glenn D. Braunstein, MD, said the results do not mean that white wine increases the risk of breast cancer but that grapes used in those varieties may lack the same protective elements found in reds.

"There are chemicals in red grape skin and red grape seeds that are not found in white grapes that may decrease breast cancer risk," said Braunstein, vice president for Clinical Innovation and the James R. Klinenberg, MD, Chair in Medicine.

Researchers have discovered that resveratrol, a powerful antioxidant found in common foods such as found in fruits, nuts and red wine can help prevent of a metabolic syndrome.
Advertisement
<< Inflammation and Depression
Pompe Disease - New Finding >>

The Essence of Yoga Drug Side Effects Calculator Noscaphene (Noscapine) Blood Pressure Calculator Sinopril (2mg) (Lacidipine) Color Blindness Calculator Accident and Trauma Care Drug - Food Interactions Sanatogen Turmeric Powder - Health Benefits, Uses & Side Effects
This site uses cookies to deliver our services.By using our site, you acknowledge that you have read and understand our Cookie Policy, Privacy Policy, and our Terms of Use  Ok, Got it. Close
×