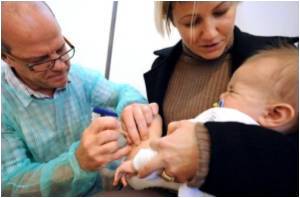 The combination vaccine for measles, mumps, rubella and chickenpox (MMRV) is associated with double the risk of febrile seizures for 1- to 2-year-old children compared with same-day administration of the separate vaccine for MMR (measles, mumps, rubella) and the varicella (V) vaccine for chicken pox, according to a Kaiser Permanente Division of Research study appearing online in the journal Pediatrics. A febrile seizure is a brief, fever-related convulsion but it does not lead to epilepsy or seizure disorders, researchers explained.

Funded by the U.S. Centers for Disease Control, the study analyzed 459,000 children 12 to 23 months old from numerous health systems across the United States receiving their first dose of measles-containing vaccine and found MMRV to be associated with a two-fold increased risk of fever and febrile seizures 7-10 days after vaccination compared with same-day administration of a separate shot for MMR and the varicella (chickenpox) vaccine. This study found that the risk for a febrile seizure after the first dose of MMRV vaccine is low, although it is higher than after MMR vaccine and varicella vaccine administered as separate injections.

The study found no evidence of an increased febrile seizure risk after any measles vaccine beyond 7-10 days post vaccination.

Mumps is a contagious viral infection that typically causes a painful swelling of one or more of the salivary gland. Mumps most commonly occurs in children aged 2-12 years who have not been vaccinated against the disease. However, it can occur at any age. It was a common childhood disease before the development of the mumps vaccine (MMR vaccine).
Advertisement
The CDC recently recommended that either vaccine may be used for first dose for 1-2 year olds, however families without a strong preference for MMRV should receive separate MMR +V vaccines, Klein said. The CDC reiterates that providers who consider using MMRV should discuss with families and caregivers the risk and benefits.

"While this study and the resulting CDC recommendations are very important and ones our pediatricians will follow, it is also important to emphasize that it is more common for a child to have a febrile seizure caused by a simple cold than by an immunization. And though febrile seizures are a very scary event for a family, they are not dangerous and do not lead to later epilepsy or seizure disorders," said Randy Bergen, MD, a Kaiser Permanente pediatrician and infectious disease specialist at Kaiser Permanente-Walnut Creek.

MMRV was licensed by the FDA in 2005. MMRV was subsequently recommended by the Advisory Committee on Immunization Practices (ACIP) in 2006. Although prelicensure studies of MMRV among 1-2 year olds noted higher rates of fever and measles-like rash one to two weeks post vaccination when compared with separate MMR + V, it was unknown at the time of MMRV's licensure whether a higher rate of fevers was similarly associated with increased risk of febrile seizures. In February 2008, Kaiser Permanente researchers alerted the ACIP to preliminary evidence of an increased risk of febrile seizures following MMRV. This study represents additional data on twice as many vaccines.

"The Vaccine Safety Datalink, which we used to conduct this study, is a premiere example of how different managed care organizations can leverage their electronic medical records to improve vaccine safety and monitoring," Klein said.

This is the latest in a series of Kaiser Permanente studies undertaken to better understand the protective effects and risks of vaccines. Recent published studies found children of parents who refuse vaccines are nine times more likely to get chickenpox and 23 times more likely to get whooping cough compared to fully immunized children. A study published last year found that herpes zoster, also known as shingles, is very rare among children who have been vaccinated against chicken pox. A recent study in the Journal of the American Medical Association found that the pneumococcal vaccination is not associated with a reduced risk of heart attacks or strokes in middle-aged men.

Epilepsy is a medical condition where the brain cells fire abnormal electrical signals that physically manifests as a 'Seizure'. There should be two or more seizures before the term epilepsy should be used.
Advertisement
News A-Z
A B C D E F G H I J K L M N O P Q R S T U V W X Y Z
What's New on Medindia