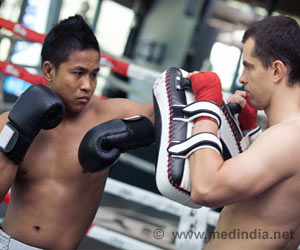 A new study claims that boxing poses a greater risk of serious injury than mixed martial arts that has a reputation for being one of the most brutal and bloody of all contact sports.

"Yes, you are more likely to get injured if you are participating in mixed martial arts, but the injury severity is less overall than in boxing," explained lead study author Shelby Karpman, sports medicine physician at Glen Sather Sports Medicine Clinic, University of Alberta in Canada.

The way boxing is designed there will be times where someone will get bleeding or irreversible damage to the brain and they will either die or have brain damage.
Advertisement
‘University of Alberta researchers found that majority of MMA fighters suffered some form of injury in their bouts -- significantly higher than the injury rate of boxers.’

"Most of the blood you see in mixed martial arts is from bloody noses or facial cuts; it doesn't tend to be as severe but looks a lot worse than it actually is," Karpman noted.

Boxers can now take advantage of modern technology after a start-up company developed 'smart boxing gloves' called the iPunch which can connect to smartphones.
Advertisement
Boxers, however, are more likely to experience serious harm from concussions and other head trauma, loss of consciousness, eye injuries, smashed noses and broken bones. The study involved review of post-fight records from 1,181 MMA fighters and 550 boxers who fought matches in Edmonton between 2003 and 2013.

The researchers found that 59.4 percent of MMA fighters suffered some form of injury in their bouts -- significantly higher than the injury rate of 49.8 percent for boxers.

Most of these injuries were bruises and contusions. But boxers were more likely to experience loss of consciousness during the bout (7.1 percent compared with 4.2 percent for MMA fighters) or serious eye injuries.

Boxers were also significantly more likely to receive medical suspensions due to injuries suffered during bouts. The research was published in the Clinical Journal of Sports Medicine.

Little Risk of Injury to Voice Posed By Beatboxing

In comparison to the sweet song of a soprano, beatboxing, with it's harsh, high-energy percussive sounds might seem harder to most people.
Advertisement
<< Merck, Eli Lilly Being Probed by the Justice Department on ...
Online Shopping can Prevent Stress, Hypertension, Depressio... >>