Misconceptions About Daily Calorie Intake Leading to Obesity By Snacking

People eat snacks not only because they taste good, but also because they are motivated by ideas about what they supposedly can do for them, a new study has revealed.

Today, roughly a quarter of the calories in the American diet come from snacks, the report said.

"Everyone is constantly eating, especially foods that are convenient to buy and hold," ABC News quoted Phil Lempert, a food-industry analyst in Santa Monica, California, as saying.


Recalling a research that was released at the end of last year may help explain why these between-meal bites have such power over us.

The study had rolled out benefits of eating more frequently, as opposed to sticking to three main meals.

Their theory was that regularly stoking your metabolism with food could actually help you burn more calories.

As a result, nutritionists began advocating an eating plan that distributed the total daily calories (around 1,800 for a 130-pound woman) among five or six "mini meals" eaten three to four hours apart.

But unfortunately, too many people simply added two or three smaller meals (at 250 to 300 calories each) to their usual 400-to 500-calorie breakfasts, lunches, and dinners and ended up overeating, all in the name of better health.

The study has been published in The Journal of Nutrition.

Obese Individuals Cannot Resist High-Calorie Foods
A new study has revealed that people who are obese do not have the same ability to resist high calorie food items compared to those who are of normal weight.
READ MORE 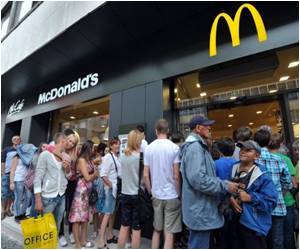 McDonalds Will Now Display Calorie Content of Items on Menu
Information about the calories contained in the items on the menu is the latest endeavor of the famous McDonald's, as an effort to help people make informed food choices.
READ MORE

Low Calorie DietWhy Do We Eat - Nutrition FactsDiet Lifestyle and Heart DiseaseLifestyle Modification: No Big Deal!Turn This Diwali into a Lighter Sweeter CelebrationChronic Dieting - Is it an Eating Disorder?