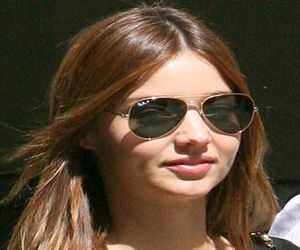 Miranda Kerr has been named as the 'Most Beautiful Person' of 2012 by Australian magazine.

To celebrate the honour, Kerr posed with her baby son Flynn for an adorable and intimate family portrait.

Australian model Miranda Kerr has offered men ten tips on how they can have romantic harmony with their partners and continue doing so.
Advertisement

Despite having a hugely busy schedule and an enviable career, the Victoria's Secret model admits that her life has been made complete thanks to motherhood.


"I was working 18-hour days. Now that pace has slowed so I can spend the majority of my time with Flynn," the Daily Mail quoted her as telling Who magazine.

Lady Gaga has revealed that she feels most beautiful when she is happy. The 25-year-old singer values her heart and brain over the rest of her body and said that she is very content
Advertisement
The sheer mention of her son sends the 28-year-old into a smiling frenzy.

"I'm first a wife and a mother, and then comes work," she said.

This is the second time that the wife of actor Orlando Bloom has won the title.

She describes Flynn as being like a 'little ball of sunshine' who brightens up her day.

"He's a really charming, lovely boy. He has that look in his eye like, 'What trouble am I going to get into next?' But I like that, it's like me," she added.

A dating website, which promotes itself as the largest most exclusively beautiful community in the world, seems to be in trouble.
Advertisement
<< Gene's Key Role in Type 2 Diabetes Identified
Know-how 'Self Realization' May Yield Better Performance At ... >>