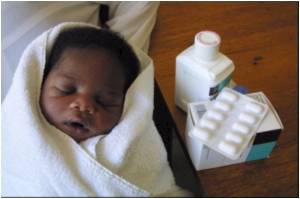 African ministers declared in Rome on Friday that universal accessibility to anti-retroviral treatment for HIV-positive people has resulted in lowering of mother-to-child HIV transmission rates.

"The vertical transmission of the virus from mother to child is reduced from 33.1 percent to 1.5 percent" due to treatment in Malawi, Health Minister Mary Shaba said at the conference hosted by Catholic charity Sant'Egidio.

Marco Impagliazzo, the head of the charity, which operates treatment programmes and testing laboratories in 10 African countries, said: "A generation of children without this illness is being born" thanks to treatment.


The conference brought together health ministers from 18 African countries including several with some of the highest HIV prevalence rates in the world such as Kenya, Malawi, Mozambique, Uganda and Zimbabwe.

Encyclopedia section of medindia explains in brief about the prevention for AIDS/HIV
Advertisement
A wide-ranging global study released Thursday showed that people with HIV who take antiretrovirals before their health declines have a 96 percent lower risk of transmitting the virus to a partner.

The study, which covered mainly heterosexual couples in Africa, India and the Americas, was hailed by AIDS experts as a "game-changer" that will transform how the disease is managed, 30 years after it first surfaced.

There was no official word at the conference in Rome on prevention through contraception, although Shaba said the Catholic Church had "relaxed" its position on condom use -- a taboo topic in official doctrine.

Angelo Bagnasco, head of the Italian Catholic Church, said: "The best form of prevention is to offer treatment to many."

"There also needs to be a major education effort to change mentalities and cultures and to re-affirm the dignity of human beings," he said.

"A particular sign of hope and of victory over evil are the 14,000 healthy children born from HIV-positive women," he added.

The keynote speech at the conference was given by Maria da Luz Guebuza, wife of Mozambican President Armando Guebuza, who has taken a leading role in promoting HIV/AIDS programmes and women's rights.

Noscaphene (Noscapine) Find a Doctor Post-Nasal Drip The Essence of Yoga How to Reduce School Bag Weight - Simple Tips Calculate Ideal Weight for Infants Drug Interaction Checker Sinopril (2mg) (Lacidipine) Daily Calorie Requirements Vent Forte (Theophylline)
This site uses cookies to deliver our services.By using our site, you acknowledge that you have read and understand our Cookie Policy, Privacy Policy, and our Terms of Use  Ok, Got it. Close
×