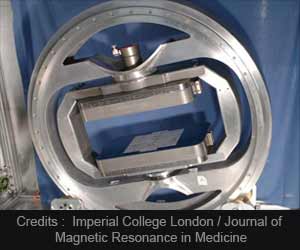 Mini magic MRI scanner could potentially detect knee injuries more accurately, reports a new study. The findings of the study are published in the journal Magnetic Resonance in Medicine.

A team of researchers at Imperial College London have developed a prototype mini MRI scanner that fits around a patient's leg.


‘Magic angle scanning can be used to visualize the knee, combining this with the new prototype mini scanner could help detect knee injuries more quickly and accurately.’


In a proof-of-concept study using animal knees, the results suggest the technology could be used to show all the structures of the knee.

The scientists say the device (which looks like a large metal ring through which a patient places their leg) could help diagnose conditions such as anterior cruciate ligament injuries - particularly common among footballers.

Furthermore, the small size of the device could enable it to be used in local clinics and even GP surgeries, potentially reducing NHS waiting times for MRI scans.

The research was funded by the National Institute for Health Research.

Currently, key components of the knee joints such as ligaments and tendons are difficult to see in detail in the MRI scans, explains Dr Karyn Chappell, a researcher and radiographer from Imperial's MSK Lab: "Knee injuries affect millions of people - and MRI scans are crucial to diagnosing the problem, leading to quick and effective treatment. However, we currently face two problems: connective tissue in the knee is unclear on MRI scans, and people are waiting a long time for a scan."

Dr. Chappell added: "This can cause particular problems for women, as they are at greater risk of anterior cruciate ligament injuries. The reasons for this are unclear, but it could be linked to hormones such as estrogen making ligaments more elastic, leading to more joint injuries."

Knee injuries commonly affect one of three areas: the tendons (which attach muscle to bone), the meniscus (a cushioning pad of cartilage that prevents the bones of the joints rubbing together), or the ligaments (tough bands of connective tissue that hold bones in a joint together).

Following a knee injury, a doctor may refer a patient for a MRI scan to help establish which part of the joint is injured. MRI scans use a combination of radio waves and strong magnets to 'flip' water molecules in the body. The water molecules send out a signal, which creates an image.

However, tendons, ligaments, and meniscus are not usually visible with MRI, due to the way water molecules are arranged in these structures, explains Dr. Karyn Chappell.

"These structures are normally black on an MRI scan - they simply don't produce much signal that can be detected by the machine to create the image. This is because they are made mostly of the protein collagen, arranged as fibers. The collagen fibers hold water molecules in a tight configuration, and it is, in fact, water that is detected by the MRI. If you do see a signal, it suggests there is more fluid in the area - which suggests damage, but it is very difficult for medical staff to conclusively say if there is an injury."

To overcome this problem, Dr. Chappell harnessed the power of a phenomenon called the 'magic angle': "The brightness of these tissues such as tendons and ligaments in MRI images strongly depends on the angle between the collagen fibers and the magnetic field of the scanner. If this angle is 55 degrees, the image can be very bright, but for other angles, it is usually very dark."

The team explains the magic angle is achieved in their scanner because they are able to easily change the orientation of the magnetic field. While the patient sits comfortably in a chair, the specially designed magnet (which uses motors and sensors similar to those found in robots in car factories) can rotate around the leg and the orientate magnetic field in multiple directions.

This is not possible in current hospital MRI scanners, which are also much more expensive than the prototype scanner.

"Previously, the magic angle phenomenon was thought of as a problem, as it could mean medical staff mistakenly thinking the knee is injured. However, I realized that if we took a number of scans around the knee, we could use the signal produced by the magic angle effect to build a clear picture of the knee structures," explained Dr. Chappell.

"Specifically, we can combine images obtained at different magnet angles and not only increase the brightness, but also see how the collagen fibers are arranged. This enables us to establish the pattern of collagen fibers in the knee structures, which is crucial information ahead of treatments such as repairing a torn meniscus," added Dr. Chappell.

"At the moment, it's very difficult to see which direction the collagen fibers run in a meniscus. This is important because sewing across the fibers will effectively repair a tear in the meniscus. However, if the stitch is in the same direction as the fibers, the repair may fail."

In a new study, published in the journal Magnetic Resonance in Medicine, the multi-disciplinary team scanned the knee joints of six goats and ten dogs in a conventional MRI scanner.

All of the dog legs were donated by the Royal Veterinary College, having been donated for research by dog owners following the death of their pet.

Dogs suffer from knee injuries and arthritis similar to humans, making them a good subject for the study.

The results showed that using the magic angle can accurately detect ligament and tendon damage.

The team say now they know magic angle scanning can be used to visualize the knee, combining this with the new prototype mini scanner could enable knees to be accurately scanned with this technology - and hope to progress to human trials of the 'mini' scanner within a year.

Dr. Chappell explained: "Although this is an early-stage proof-of-concept study, it shows the technology could potentially be used to accurately detect knee injury. We now hope to enter human trials - and explore if this technology could be used for other joints such as ankles, wrists, and elbows."

Knee Injury in Female Athletes: Chances of Re-tear Less With One Graft
One graft alone is better to perform Anterior cruciate ligament(ACL) reconstruction, which is considered to be the standard treatment for ligament injury in the knee.
READ MORE 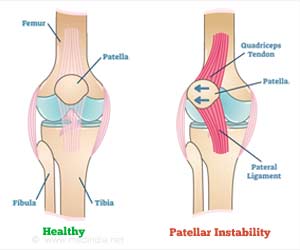