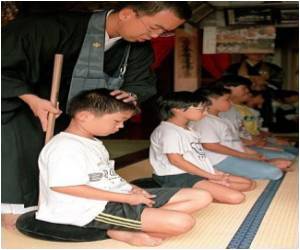 If a someone you knew well won $100 and then offered you a few dollars, would you accept it? The logical answer would seem to be, sure, why not? "But human decision making does not always appear rational," said Read Montague, professor of physics at Virginia Tech and director of the Human Neuroimaging Laboratory at the Virginia Tech Carilion Research Institute.

According to research conducted over the last three decades; only about one-fourth of us would say, "Sure. Thanks." The rest would say, "But that's not fair. You have lots. Why are you only giving me a few?" In fact, people will even turn down any reward rather than accept an 'unfair' share.

Unless they are Buddhist meditators, in which case - fair or not - more than half will take what is offered, according to new research by Ulrich Kirk, research assistant professor with the Human Neuroimaging Laboratory at Virginia Tech; Jonathan Downar, assistant professor with the Neuropsychiatry Clinic and the Centre for Addition and Mental Health at the University of Toronto; and Montague, published in the April 2011 issue of Frontiers in Decision Neuroscience.


Their research shows that Buddhist meditators use different areas of the brain than other people when confronted with unfair choices, enabling them to make decisions rationally rather than emotionally. The meditators had trained their brains to function differently and make better choices in certain situations.

The most amazing and complex organ in the entire universe, the human brain continues to remain an enigma.
Advertisement
The research "highlights the clinically and socially important possibility that sustained training in mindfulness meditation may impact distinct domains of human decision making," the researchers write.

The research came about when Montague wondered whether some people are capable of ignoring the social consideration of fairness and can appreciate a reward based on its intrinsic qualities alone. "That is," he said, "can they uncouple emotional reaction from their actual behavior?"

Using computational and neuroimaging techniques, Montague studies the neurobiology of human social cognition and decision-making. He and his students recruited 26 Buddhist meditators and 40 control subjects for comparison and looked at their brain processes using functional MRI (fMRI) while the subjects played the "ultimatum game," in which the first player propose how to divide a sum of money and the second can accept or reject the proposal.

The researchers hypothesized that "successful regulation of negative emotional reactions would lead to increased acceptance rates of unfair offers" by the meditators. The behavioral results confirmed the hypothesis.

But the neuroimaging results showed that Buddhist meditators engaged different parts of the brain than expected. Kirk, Downar, and Montague explained that "The anterior insula has previously been linked to the emotion of disgust, and plays a key role in marking social norm violations, rejection, betrayal, and mistrust. In previous studies of the ultimatum game, anterior insula activity was higher for unfair offers, and the strength of its activity predicted the likelihood of an offer being rejected. In the present study, this was true for controls. However, in meditators, the anterior insula showed no significant activation for unfair offers, and there was no significant relationship between anterior insula activity and offer rejection. Hence, meditators were able to uncouple the negative emotional response to an unfair offer, presumably by attending to internal bodily states (interoception) reflected by activity in the posterior insula."

The researchers conclude, "Our results suggest that the lower-level interoceptive representation of the posterior insula is recruited based on individual trait levels in mindfulness. When assessing unfair offers, meditators seem to activate an almost entirely different network of brain areas than do normal controls. Controls draw upon areas involved in theory of mind, prospection, episodic memory, and fictive error. In contrast, meditators instead draw upon areas involved in interoception and attention to the present moment. ...This study suggests that the trick may lie not in rational calculation, but in steering away from what-if scenarios, and concentrating on the interoceptive qualities that accompany any reward, no matter how small."
Source: Eurekalert

Mindfulness meditation can assit in the process of Marriage and Family Therapy (MFT), a study has revealed.
Advertisement
<< Music Lessons in Childhood Can Keep Mind Sharper Lifelong
Faster and Cheaper Genome Sequencing Could Rapidly Improve ... >>

Sanatogen How to Reduce School Bag Weight - Simple Tips Hearing Loss Calculator Sinopril (2mg) (Lacidipine) The Essence of Yoga Diaphragmatic Hernia Find a Hospital Drug Interaction Checker Find a Doctor Drug Side Effects Calculator
This site uses cookies to deliver our services.By using our site, you acknowledge that you have read and understand our Cookie Policy, Privacy Policy, and our Terms of Use  Ok, Got it. Close
×