Millions of Child Deaths in Past Decade Avoidable 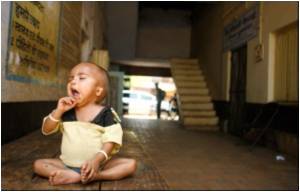 A lack of governmental concern which deprived major medical advances from the poor resulted in four million children dying in the past decade, alleged a leading aid group.

A highly critical report by Save The Children was the latest shot across the bows of world powers before they meet at the United Nations this month to discuss how to reach the Millennium Development Goals (MDGs) set at a major summit 10 years ago.

The UN Children's Fund (UNICF) released a parallel report calling for greater fairness in health spending and saying that millions of lives could be saved by targeting more care at the poor.


"Some notable progress has been made in reducing child deaths in recent years, but 8.8 million newborns and children still die each year," said Carolyn Miles, Save the Children's executive vice president.
Advertisement
"Too often, where children live or how much money their parents have determines whether they will receive proven, low-cost, lifesaving care. We must all work to end these fatal inequities -- not only between countries, but within countries themselves."

Save the Children looked at data from 42 "high-mortality countries." It found that poorer children are far more likely to die. If all children had the same risk of death as the top 20 percent in their country, four million child deaths could have been prevented in the last 10 years, the report said.

The main problems are pre-and post-natal care, skilled attendance at birth, and low-cost treatment for the major killers: pneumonia, diarrhea, and malaria. Save the Children said the inequity is a growing problem in many developing countries.

The report said that since 1990, the global child mortality rate has declined by 28 percent -- well short of the target set by Millennium Summit goal of a two-thirds reduction by 2015.

Many high risk countries -- including Ghana, Indonesia, Mozambique, Egypt and Bolivia -- have substantially cut the number of deaths. Nineteen of 68 high-priority countries are now expected to meet the millennium targets for child health.

But Chad, Democratic Republic of Congo, Kenya, South Africa and Zimbabwe have all seen their child death rates rise in the past decade, the report said.

At the new Millennium Development summit on September 20-22, UN Secretary General Ban Ki-moon and other world leaders will launch a new push on women's and children's health in a bid to accelerate progress on child and maternal health.

The 2000 summit set eight Millennium Development Goals to be achieved by 2015 in areas ranging from health to employment and access to the Internet. With five years to go, experts say that none of the global goals are likely to be met and Save The Children said the child health target is one of the most off-track.

UNICEF also said that current health spending policies should be changed to give greater priority to the poor.

"Our findings challenge the traditional thinking that focusing on the poorest and most disadvantaged children is not cost-effective," said Anthony Lake, UNICEF's executive director.

"An equity-focused strategy will yield not only a moral victory -- right in principle -- but an even more exciting one: right in practice."

UNICEF said it had found that money invested in the health of under fives in low-income, high-mortality countries would avert 60 percent more deaths than the current approach.

The UN agency said a change of policy would "greatly accelerate progress towards the MDGs and reduce disparities within nations."

Development Milestone
Medindia offers a milestone chart for the growing child, by which we can determine the activities .....