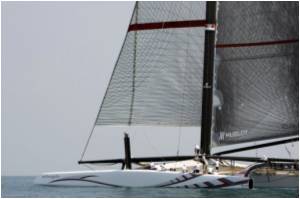 Luxury yachts that whisk their millionaire owners or charter guests to the world's top beauty spots, guzzling gallons of fuel on the way, have long scraped the bottom of the green league tables.

But as superyachts converged on the Riviera for this year's 20th Monaco Yacht Show, a small but determined minority were flying the green flag as the ever expanding fleet of mega yachts seeks to reduce its carbon footprint.

Groundwater depletion is accelerating across the world, researchers warn.
Advertisement

Paolo Moretti, who heads the yachting division of Italy's ship certification body RINA, told AFP interest in environmental topics has spiked in the yachting sector over the last five years.


"Luxury yachts have big budgets but owners now not only want to excel in terms of comfort and luxury but also in environmental sustainability," he said.

His worn hands have worked tirelessly since dawn, churning the soil, cleaning sand in a pan and finally revealing tiny flakes of green gold , the world's first certified fair trade gold.
Advertisement
The influential four-day show that opened Wednesday in the tiny, glitzy principality attracted an exceptional turnout of some 100 superyachts of up to 90 metres (300 feet) in length.

Among the 28,000-plus participants crammed into Monaco's horseshoe-shaped port, there were some 500 firms involved in the design, paint, engines and waste disposal for the superyachts.

And many of them are working on how to make yachting more sustainable.

One newly-launched sea-giant -- Exuma -- had its green ambitions on full display.

The first of a new series of Vitruvius motor yachts built by Italy's Pichiotti and Perini Navi, Exuma was designed by Philippe Briand, famous for his cutting-edge sailing yachts.

"The design of the yacht, which is narrower and sleeker than most motor yachts, has the same performance efficiency of sail boats," he said.

Exuma's innovation won it the show's Green Plus Yacht Award 2010, which was presented Friday by eco-campaigner Prince Albert to its Monaco-resident owner.

Short of a design revolution, one of the easiest ways for the green-minded millionaire to reduce his yacht's carbon footprint today is to sign up to a yacht carbon offset scheme.

"Interest (in carbon offsetting) is growing all the time," according to Mark Robinson, managing director of a service called Yacht Carbon Offset, whose list of clients from the Middle East, Russia and Europe reaches into three figures.

The principle of offsetting is straightforward: a yacht's greenhouse gas emissions are quantified and then balanced by equivalent emissions reductions from carefully-selected green energy projects around the world.

Yachts using the service include Lionheart, Candyscape II and RoMa as well as the recently-launched 57.7-metre sailing ketch Twizzle, whose owner also chose to offset the carbon footprint from the energy and main materials used in the boat's construction.

Until now, yachting lagged behind other sectors in terms of environmental awareness, for two reasons, according to Khaldoun.

First, the industry is deeply conservative and often slow to adopt new trends. Second -- and most importantly -- research and development costs are enormous in this highly specialist sector where yacht builders often lack the budgets needed for such projects.

Despite these challenges, however, a number of yachts with sustainable development features are on the drawing board.

The Dutch-based shipyard Feadship, which has built some of the world's most famous superyachts for billionaires that include Paul Allen and Russian oligarch Roman Abramovich, is now turning to nature for innovation.

Its latest "Future Feadship" concept yacht, named Breathe after the boat's natural onboard ventilation and cooling system, had pride of place on company's stand.

For the time being, "Breathe" is an on-paper concept.

But many of its proposed features -- including special paint on the hull to reduce water resistance, solar cells and diesel-electric hybrid propulsion -- are being explored by specialist marine firms, experts said here.

Novel ways are also being offered to deal with the large amounts of garbage that accumulate on yachts, which often spend many days and even weeks at sea without docking at a port.

These include a unit that grinds waste into an eco-friendly sterilised fluff-like end product.

But industry experts here this week warned that efforts to make yachting more environmentally-friendly are likely to have a limited impact.

For proof, just take a look at the "toys" onboard the green award-winning Exuma: they include a huge amphibious "jeep" the size of a Hummer, a large hovercraft, two electric land scooters and two seabobs.

For the first time, scientists have chemically identified compounds released by mosquitoes' natural aquatic predators that function as warning signals for egg laying mosquitoes-
Advertisement
Advertisement
This site uses cookies to deliver our services.By using our site, you acknowledge that you have read and understand our Cookie Policy, Privacy Policy, and our Terms of Use  Ok, Got it. Close
×