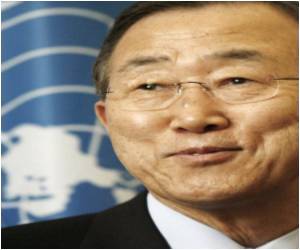 For the Millennium Development Goals (MDG) to be reached, over 100 billion dollars will be needed over the next five years, disclosed UN Secretary General Ban Ki-moon.

About 26 billion dollars would be needed for the world's poorest 49 countries in 2011 and the figure would rise to 42 billion dollars by 2015 -- the target date for the development goals, Ban told a press conference.

An international summit on the MDGs is to be held at the UN headquarters next week, aiming to kickstart floundering efforts to reach the eight aims first set at the Millennium summit in 2000.


Ban said he expected about 139 heads of state and government in New York and insisted that the goals -- which range from cutting abject poverty by half, cutting the number suffering from hunger by half, universal primary education and reducing child mortality by two thirds -- can still be reached.
Advertisement
"Of course, the deadline is approaching fast, and many countries are falling short, especially in Africa. Inequities are growing within and among countries," the UN chief said.

"Too often, global economic management neglects the poor and vulnerable. And the money we need, even though it is modest, is not yet there -- a problem compounded by the economic crisis.

"Our challenge is to put our resources where they will have the greatest impact -- education, jobs, health, smallholder agriculture, infrastructure and green energy," he said.

A summit document setting out ways to reach the goals has already been prepared and Ban said he would outline a Global Strategy for Women's and Children's Health at the summit.

Many experts and aid agencies remain skeptical however at the chances that any of the goals will be met.

"There's a lot of worthy language in this document about promoting development in poor countries, but embarrassingly little on what actions leaders will take to actually achieve the MDGs. With just five years until the 2015 deadline, and lives on the line, this is not good enough," said Oxfam spokesperson Emma Seery.

"There is a real risk that progress on the MDGs will be wiped out by the economic crisis, the climate change fallout; and successive food and fuel crises.

"The poorest people in the poorest regions of the world have been hardest hit by these crises, and rich countries have compounded the problem, with more than half of them cutting their aid budgets last year," she added.

As Usual There's a Struggle to Agree UN Summit Kickstart for Millennium Goals
The strategy to be embraced at a looming United Nations summit aiming to get the lofty Millennium .....

UN Says Clean Energy for World's Poor Essential for Achieving Millennium Development Goals
The need for providing clean energy to the world's underprivileged people has been emphasized by ...