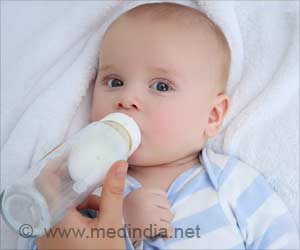 Children with Duarte galactosemia, a genetic disorder, are not at a higher risk of long-term developmental abnormalities than their unaffected siblings, regardless of their exposure to milk as infants, finds a new study. The findings published in PEDIATRICS finally offer clarity to parents of children with Duarte galactosemia, their health care providers and health officials.

Milk can be lethal to babies with classic galactosemia, a rare genetic disorder that severely impairs the body's ability to process a milk sugar known as galactose and is associated with a host of neurodevelopmental issues. However, the fate of children with Duarte galactosemia--a milder, more common variant--has been unclear. As a result, state-level recommendations on milk intake for children diagnosed with Duarte galactosemia have varied widely, from no limitations to banning all milk for the first year or more of a child's development.

If you are allergic to certain food items-Watch out for what you eat
Advertisement
‘The findings of the study would impact clinical care and newborn screening program for Duarte galactosemia.’
Tweet it Now

"Therefore, we don't need to detect Duarte galactosemia, and we don't need to restrict their milk intake," said co-author Nancy Potter, a speech-language pathologist and a professor in the Department of Speech and Hearing Sciences at the WSU Elson S. Floyd College of Medicine.


Potter, who collaborated on the study with a team of researchers from Emory University, said the findings provide peace of mind to parents of children with Duarte galactosemia that they can confidently feed their child as they would any other baby.

Encyclopedia section of medindia explains about the consumption of cows milk, which dates back to about 6000 to 8000 B.C.
Advertisement
"There has been great angst among parents of children with Duarte galactosemia," Potter said. "They're wanting to know, 'Am I harming my baby by giving him or her milk?' We know the value of breast milk to a baby--is it worth restricting that? That's the question we set out to answer."

She said the study findings also make a compelling argument for changes to newborn screening criteria for galactosemia that could provide significant cost savings while minimizing the high number of false positives associated with screening intended to detect Duarte galactosemia.

While newborns are screened for galactosemia in all 50 U.S. states, screening protocols vary from state to state--some only test for the extreme deficiencies of classic galactosemia, while others are designed to detect Duarte galactosemia as well. Newborn screening tests for galactosemia look at blood levels of an enzyme called galactose-1-phosphate uridylyltransferase (GALT), which helps convert galactose into glucose that the body can use for energy. Children with GALT enzyme levels of 1 percent or less are considered to have classic galactosemia, which affects about one out of every 50,000 babies born in the U.S. Most babies with Duarte galactosemia--which is 10 times more common--have about 25 percent of the normal level of GALT activity.

The researchers surveyed parents about each child's level of dairy consumption as an infant, finding that 40 percent had consumed a substantial amount of dairy, whereas 60 percent had not. They also tested all children for a wide range of outcome measures representing five developmental domains: cognitive development, physical development, speech/language and hearing, motor development, and socioemotional development. Testers were blinded to the status of their subjects, meaning they did not know whether children being tested were case patients or controls. Thorough analysis of the study data showed that there were no significant differences in outcomes between case patients and controls.

In a commentary published alongside the study, Shawn McCandless--a professor of pediatrics and genetics at the University of Colorado Denver and the president of the Society for Inherited Metabolic Disorders--said, "The field has been waiting 50 years for this study, since newborn screening (NBS) for galactosemia began. This work can be used to impact clinical care and NBS program planning. It can also be used to teach us important lessons about the public funding of research into clinical outcomes and the importance of data-driven clinical decision-making."

Potter said their study is the largest ever conducted in children with Duarte galactosemia and has contributed to clearing up conflicting findings from two earlier, smaller studies.

Galactorrhea is the spontaneous breast milk production in a woman who is not pregnant or nursing a child. Around ninety percent of women with high levels of the hormone prolactin suffer from galactorrhea.
Advertisement

What is almond milk? Is almond milk good for you? This plant based alternative to dairy milk has health benefits aside from alleviating symptoms of lactose intolerance, which will be discussed in this article.

Down Syndrome is a congenital disorder among children commonly born to older mothers. The condition is also ...

Paa is a film in which Amitabh Bachchan, in a rare role reversal, plays son to Abhishek Bachchan, his ...