In an animal study researchers found that animals with extra prolactin had larger livers, regenerated their livers faster after partial removal, and were significantly more likely to survive a liver surgery.

The hormone prolactin is probably best known for its role in stimulating milk production in mothers after giving birth. But prolactin also has an important function in the liver. This organ has the highest number of prolactin receptors in the body, ports that allow this hormone to enter liver cells. There, prolactin signals these cells to multiply and new blood vessels to grow to fuel this organ's expansion.

Wondering if these properties might be useful to encourage the liver to regrow after surgery to remove part of itsometimes necessary to treat cancer or other liver diseases, or to donate liver tissue for transplantsCarmen Clapp of the Universidad Nacional Automoma de Mexico and her colleagues worked with animal models on both ends of a prolactin spectrum: rats that overproduced the hormone, and mice specially bred to have no prolactin receptors, the equivalent of a dearth of the hormone since prolactin can't enter these animals' cells.


The researchers found that the animals with extra prolactin had larger livers, regenerated their livers faster after partial removal, and were significantly more likely to survive that liver surgery compared to the animals that couldn't process prolactin.

The article is entitled "Prolactin Promotes Normal Liver Growth, Survival, and Regeneration in Rodents." It appears in the American Journal of Physiology-Regulatory, Integrative and Comparative Physiology, published by the American Physiological Society.

Methodology The researchers made rats overproduce prolactin by implanting two extra anterior pituitary glandsthe gland that produces prolactinin the animals' backs. To make sure the surgery itself wasn't responsible for any effects they saw, they compared these rats to others that had a sham surgery, in which they made incisions but didn't implant extra anterior pituitary glands. To confirm that prolactin itself was responsible for the effects they saw in the overproducers, the researchers injected some of the rats that had the real surgery with a drug that deactivated extra prolactin, bringing the overproducers' prolactin down to baseline levels.

As a contrast to these prolactin overproducers, the researchers also studied mice that were genetically engineered to not have prolactin receptors. Thus, even though these mice made prolactin, their bodies behaved as if they had none of the hormone because their cells couldn't process it.

The researchers measured the ratio of liver to body weight in each of the rats and mice. They tested how readily liver and liver blood vessel cells were dividing in some of the animals from each group. They also removed portions of the animals' livers, comparing how quickly animals from each group regenerated liver tissue. Additionally, they tested the animals' levels of interleukin-6 (IL-6), a chemical produced by cells and is kept in check by prolactin. IL-6 can stimulate the liver to repair itself at low levels but can hinder this self-repair at higher levels.

After the researchers removed portions of the animals' livers, the prolactin overproducers regenerated their livers more quickly than animals from the other groups. Mice that didn't process prolactin not only had smaller livers than the normal mice but were also significantly more likely to die in the days after surgery. Tests showed that these mice had elevated levels of IL-6, a factor that could be partially responsible for their slower healing and increased mortality.

Importance of the Findings These findings suggest that prolactin is important both for normal liver growth and for regenerating the liver after part of it is removed, with extra prolactin providing a boost for repair mechanisms. Consequently, enhancing prolactin levels could provide a way to improve regeneration when the liver becomes damaged or diseased, or after surgery. 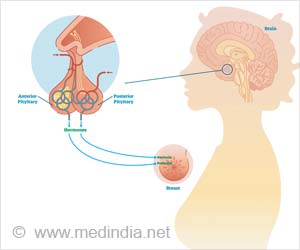 Hyperprolactinemia
Hyperprolactinemia is abnormally high levels of hormone Prolactin in the blood. This is normal in pregnancy, but, elevated levels when not pregnant or breastfeeding can affect normal menstrual function and fertility.
READ MORE