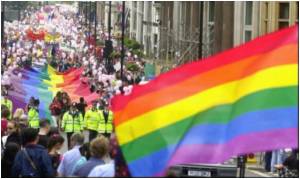 In a 5-4 split decision, the court ruled that the military criminal code which punishes homosexual behaviour with up to one year in prison is constitutional.

In a move that brings it one step closer to allowing gay troops to serve openly, the US House of Representatives voted to overturn the military's Don't Ask, Don't Tell policy.
Advertisement

"The legal code cannot be seen as discrimination against gays because such behaviour, if left unchecked, might result in subordinates being harassed by superiors in military barracks," it said in a statement.


The law's purpose was to ensure discipline within the whole military organisation, the court said.

The ruling came after an army military court filed a petition with the Constitutional Court. It asked whether the military criminal code, written in 1962, was discriminatory against gay soldiers and thus unconstitutional.

Homosexuality is not illegal under the civil legal code.

Gay Ban Closer To Being Lifted In US Military

Top US defense leaders will announce Tuesday a series of steps toward realizing President Barack Obama's vow to repeal a ban on gays serving openly in the military, The Washington Post reported.
Advertisement
<< Policy Action to Reduce HCV-Related Deaths Across Europe by...
$1bn Spent Annually by Australians on Cosmetic Procedures >>

Moscow Gay Pride Ban Not an Issue With Rights Activists

Color Blindness Calculator The Essence of Yoga Turmeric Powder - Health Benefits, Uses & Side Effects Daily Calorie Requirements Indian Medical Journals Drug Side Effects Calculator Accident and Trauma Care Diaphragmatic Hernia Selfie Addiction Calculator Vent Forte (Theophylline)
This site uses cookies to deliver our services.By using our site, you acknowledge that you have read and understand our Cookie Policy, Privacy Policy, and our Terms of Use  Ok, Got it. Close
×