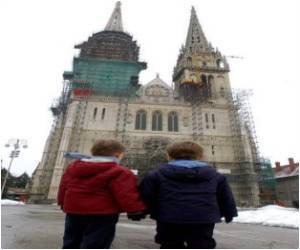 People who regularly visit religious places are at a higher risk of suffering from obesity by the time they reach middle age, a new research led by a medical student in Chicago reveals.

The study, led by Northwestern University's Matthew Feinstein, made use of the data from a previous study that included nearly 2,500 people between 20 to 32 years of age during the mid-1980s and found that more than 32 percent of those who regularly attended religious services became obese compared to less than 22 percent of those who did not attend such services regularly.

Jeff Levin, director of Baylor University's Program on Religion and Population Health, said that one of the possible reasons for the disparity might be because of the fact that those who attended the services simply sat at one place rather than engaging in some physical activity.


"A lot of the eating traditions surrounding religion are not particularly healthy; for example, constant feasts or desserts after services or at holidays -- fried chicken, traditional kosher foods cooked in schmaltz (chicken fat), and so on", he added.

Obesity is a condition where there is excess accumulation of body fat which poses a risk to the health of the individual. It can affect children and adults.
Advertisement
<< Kids Suffering from Tourettes Syndrome can Keep Symptoms Un...
Health Experts Back Tory Bill for Banning Alcohol Ads >>